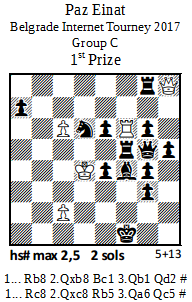 “This tourney was a very exciting one, for both participants and the organizers. The initial idea was to avoid computer testing, in order to make composers train their solving, while giving solvers the forgotten pleasure of looking for cooks… This concept soon had to be abandoned, because Christian Poisson was very quick to create the program for

HS#Max, the new fairy genre that includes only one new element when compared with HS#: the last two half-moves ask for S#1 Maximummer, instead of usual S#1.

On the other hand, we have to be grateful to Christian for saving composers and organizers from additional work, and for ensuring HS# Max an official status in the endless sea of fairy genres! Besides, it helped to receive only 1 incorrect entry…

The method of judging was the same as in our previous Composing/Solving/Judging events. After solving 18 correct entries, the eight solvers selected some favourits and analyzed them on the demonstration board. Next day they gave marks to all 18 entries, from 1 to 10.

The average marks of the first 4 compositions stood out, and were differentiated with slightest of margins, from 8.43 (the 4th place) to the 8.75 (the 1st place). Since there was no single judge, some comments given by solvers were summed up in the following award.”