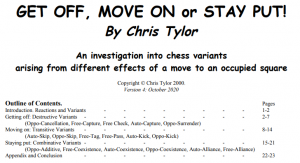 “In the late 1970s, I circulated among the members of the now defunct Fairy Chess Correspondence Circle some ideas and illustrative problems for variants arising from different effects of a piece moving to an occupied square. By 1987, many of these ideas and problems had appeared in a series of articles in George Jelliss’s magazine Chessics (issues 10-12, 17 and 29/30) under the name of ‘Chess Reactions’.”

“The present version of this account contains 105 problems belonging to 17 distinct variants (4 of them established ones, the others my own) plus another 12 more miscellaneous problems in an appendix. Almost all the problems have positions that are ‘fairy-legal’ from the normal game array; 76 of them are CT originals/corrections of variable quality, some being mere sketches to illustrate possibilities. Only a few are computer-testable, but although the majority have been looked at by someone other than myself, in the very nature of things it is likely that some will prove to be unsound. It is hoped that any defects in the problems will neither detract too much from their interest nor discourage composers from tackling some of the variants described.” – Chris Tylor