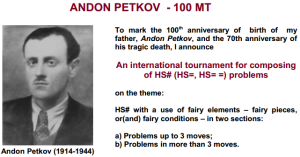 An international tournament for composing of HS#(HS=, HS==) problems

on the theme: HS# with a use of fairy elements – fairy pieces, or(and) fairy conditions – in two sections – a) Problems up to 3 moves; b) Problems in more than 3 moves.

All originals should be computer tested with any of the following programs: Popeye, WinChloe, Alybadix. Please send your originals by e-mail till October 1st, 2014, to the following address: Petko Petkov, ppetkov2702@gmail.com

The award will be published by the end of 2014.