There’s one very simple, but interesting fairy idea, which might be called also the theme: block of neutral piece, which participates in a battery creation. Different variations of such batteries are possible – the neutral piece there, let’s call it “X”, can be either a forward piece, or also rear piece.

Of course, the idea can be realised in the anti-battery play as well. It should be specially mentioned, that all these possibilities are studied and used in a practise a very little yet.

But why our “Х” should be blocked during the process? The answer is simple: it should be blocked, to not allow to the side, which gets mate, to go away – to make a move with “X” to avoid the mate. Or, in the other words, the piece “X” which is blocked with the aim – to prevent its leaving of the battery-line. Also, some special situations exist, where the piece “X” has to be blocked to prevent it from the giving a check to the opposite King, when it leaves the battery-line (such moments might happen in a case, when the neutral Locust piece is used as a piece “X”).

This article is planned as a material of the numerous parts, and at the same time it is intended to the both – to the masters in composition, and also to the beginners. For these reason many of thematic effects here in the beginning are demonstrated with the simple positions – the schemes, where the only one option or solution is possible. Also, many works of the masters of Fairy genre will be presented later in the article, after the starting material will be well-learned. Of course, the theme Block of the Neutral Battery Piece can be used in all genres of composition, in other words – for all the stipulations, which determine the aim of a play: direct mates, helpmates, selfmates, and also  help-selfmates. It is possible also to realize this theme in a fairy problems with almost any of fairy conditions: Circe, Madrasi, Andernach, Take&Make etc. But in the 1st part of this material we’ll look only at the problems without additional fairy conditions which will be discussed at the very end of this cycle of articles.

Probably, the reader immediately will notice, that the theme we are reviewing, almost always are developed in conjunctions with other themes or ideas. And the richer is this synthesis, the better is the result! But at the beginning the examples will be very simple to be understandable for any reader who is familiar with the neutral pieces.

So, let’s start from the simple effects of the blocks used in direct and indirect batteries. Now the series of the elementary schemes will be shown, but it is important to learn the methods of the blocks here very well as in the future it will be very much needed! 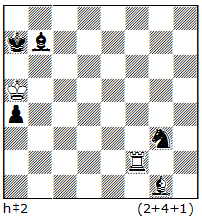 White can’t give mate right after 1. Rf8+?? because black has a strong defense: 1….nBh2! – neutral bishop simply leaves the battery-line, and white is unable to remove this protection. But how it is possible to realise H#2 here? Of course, a simple analysis shows, that it is possible to do so in a case if black will block the square h2 for the neutral bishop. It’s easy to see how it can be done: 1. Sf1! Kb5 (this is a tempo-move of white!) 2.Sh2 Rf8#.

This is how it can be done: 1. Sd4+!! Ra3!! – only this move works –the rook is prepared for the future block! 2.Sb3!! – the neutral rook is already blocked and 2…Sc3#  follows, as the rook can’t leave the battery line anymore to avoid the mate. 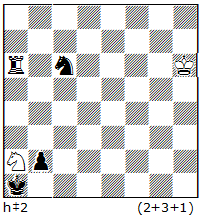 Please pay your attention to this interesting idea – although, this is in the one solution only, but plays 2 “combined batteries”: the 1st one is black-neutral Sc6/nRa6 —along the 6th horizontal, and the 2nd one is white-neutral Sa2/nRa6 – along the vertical “a”.

It is surprising, that the blocked piece can be even the neutral Queen, if it is a rear piece of the battery.

The mate is achieved after the masked battery K/Q creation in a following way: 1.nQa1 Kd5 2.nQh1 Kc6 3.g1=B+ c7# – the thematic black move here is 3.g1=B+ but the method of limiting the mobility of the neutral Q, moving it to the corner of the board, is very important for practical purposes. 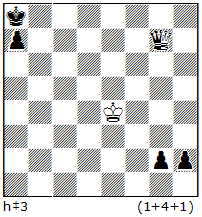 Of course, it’s possible to bloack also many fairy pieces, which participate in a batteries or anti-batteries. 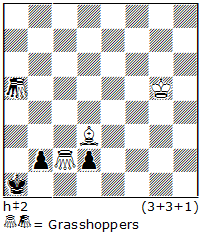 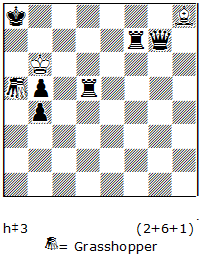 In all previous examples we were looking at the block of the rear battery-piece. But in a battery or anti-battery we can block also a forward battery-piece. The next schemes will show the typical effects of such blocks. Btw, not all the fairy pieces can be used to realize this kind of block. What you have to do here – is to choose the right fairy piece which can play the thematic role! 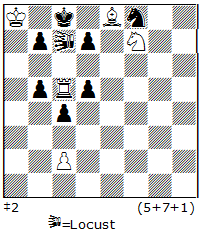 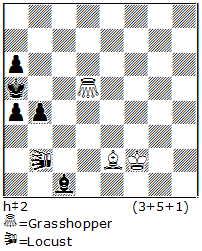 Please note the different methods of blocking — in one case the square е5 is blocked by the black, in another —  the square f1 is blocked by the white. Consequently, in some cases – especially using the neutral Locust! — the possibility of thematic block has the both sides!

So far we have discussed the schemes only, and probably some of the readers might think, that it is complicated to compose an interesting problems here. But this is not really so, as the next example shows.

At the beginning let’s see how the play will look from the white’s move: 1…Lia3 2.Sc4! nLOxc4-c3#! The idea of the combination is clear: the white Lion blocks the neutral Locust, which after the mating move can’t give a check to the white King as the square а3 is blocked! Of course, with the sacrifice of black S, the black has created an opportunity for the neutral Locust to show it strength as an opening battery-piece of nLO/Li. 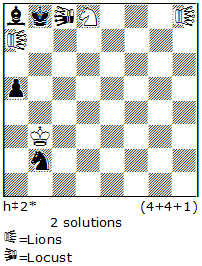 But here is black to move and because of zugzwang it is impossible to keep a set-play. So, the new play is needed! It is possible, realizing the analogical thematic: I. 1.Sd3 Lia2 2.Sc5+ nLOxc5-c4#; II. 1.Sd1 Lia4 2.Sc3 nLOxc3-c2#. Three-phase play between the Lion and the neutral Locust here has a form of duel, and an important additional motive: the black S is three times sacrificed on different squares!

In the next part we’ll look at more complicated examples with the battery-pieces like Chameleons, Chinese pieces etc.