By IGM Petko A. Petkov

In Memory of T.R. Dawson on the occasion of the 60th anniversary of his death

Using Popeye, selfmate problems with Black series can be checked with stipulation ser-hs#n. Therefore, this denotation gives an impression that ser-hs#n is a modification from a well-known genre at present, hs#n. I tend to accept that the name “Series help-self mate in n moves” (ser-hs#n#) is better that the long name “Black plays a series of n-1 helpful moves so as to reach a position where there is a normal selfmate in 1”.

It is interesting that nobody can cite even ten old compositions with the stipulation ser-hs#n! My rather huge personal data base has but a few such opuses. Thus, I found it hard to illustrate this article. I asked for help from other fairy experts and they responded. I received problems from Bo Lindgren (thanks to Hans Gruber), Peter Harris and Cornel Pacurar. I also included several of my originals.

The stipulation ser-hs#n is an interesting and fresh genre which offers many new possibilities. (At present, the traditional series-genres, without fairy elements, are mostly exhausted.)

I should also mention the recently introduced Pser, which has a direct relationship with ser-hs#n. At the end of the article, I offer several new forms with rich practical possibilities and very surprising thematic nuances.

This article is dedicated to the memory of Thomas Rayner Dawson (1889-1951). In my opinion, we need a new, creative approach to Dawson’s heritage in Fairy Chess, especially series-movers. Many new forms and ideas are possible. In this article I will accent a limited number of novelties which figure in my work plans.

II. The Power of Black Series

Series-movers, in the classical form, ser-hs#n, were still in vogue in the first years following the World War II. (Black makes a series of “n” help moves and White makes the last, mating move.)

The series-mover is very old. Some such problems, known from Arabian manuscripts (XIII century), are cited by H.J.R. Murray in his A History of Chess (1962). I also know some older Arabian examples, but this special theme should be accented in a different article. As you see, we cannot ascribe 100% authorship to Dawson for series-movers. Nevertheless, his contribution is enormous because he formulated contemporary rules for them. His publication The Fairy Chess Review (1947) was a Fairy Bible. The ser-hs#n problems acted as a magnet for all fairy composers.

Some historical information is needed, especially for younger composers. It is important to know what the special features of series-movers are and also to know the classical tendencies.

As a natural modification of ser-hs#n, the stipulation ser-s#n arises early. In just two years, 1949 and 1950, according to my fairy data-base, twenty-five such problems were published, many of them cooked.

When was the first help-compel mate, with black series (ser-hs#n), published? Unfortunately, I don’t have the answer. I only know that few have been published.

Analyzing this composition we can define the main aesthetic criteria for a contemporary ser-hs#n# as:

A – Since the main content of the problem is in Black’s moves, the prime goal is to create (a surprising) mating mechanism culminating with the last phase (s#1). To achieve this, a sufficient number of black moves is needed, often ten or more.

B – The black series must have a thematic content or a combination of themes and ideas. The composer should also strive for a difficult solution.

In the following problems these criteria are executed to some degree.

It is interesting to note that Popeye solves this problem (and others of this kind) as a ser.hs#12, i.e., it disregards the last mating move although it is shown in the solution. In my opinion, the right stipulation here can only be ser-hs#13.

Using fairy elements (pieces, conditions, etc.) a composer can demonstrate a wealth of new, and sometimes unusual, ideas. Often, such problems are also hard to solve.

The following is a quartet of hypermodern compositions by Peter Harris.

I was planning to provide many new ideas, but due to personal matters, I had a limited time to work on them. Many problems which I started remain unfinished. I hope to provide additional insight at some later date. 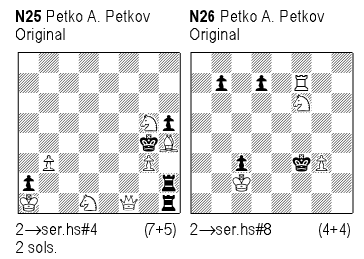 The introduction should have thematic content and also be difficult to solve, otherwise, it is not desirable.

I think there are some terminological problems when using the name series help-selfmate in “n” (as used by Popeye). I’m not sure it will be accepted as an official name. Other names are possible, of course, but a historical inevitability is the standardization of all fairy terms, names, and symbols which are used in programs and under diagrams. This work should be one of the most important duties of the WFCC. I am also hoping for a speedy incorporation of self-problems with black series into Popeye.

In regard to aesthetic criteria of help-compel mates, most of it was defined in my previous article in StrateGems (SG32), although additional work in this area is also possible.

Another area of interest is the Pser series (including the introduction element). Creative work is always an important element but fast computers will be needed for checking these problems.

My recommendation to composers is to start with schemes that incorporate fewer than 8 or 9 moves. More complex scheme will be difficult to verify. One can also work with black series (maximum 6-7 moves). The key here is to have a good thematic content.