“In total, I selected 40 problems, the most I have ever awarded in any tourney I judged. I consider myself a rather strict judge, but this time I had no difficulty finding problems to include in the award. My main difficulty was to leave out many other candidates that were also good and interesting. I can say that it was the strongest tourney I have ever judged. Congratulations for making this happen.” (The judge of JF-2015/I, Kostas Prentos)

Only the first and the longest informal competition on JF, April-December 2012, had more problems and authors than January-June 2015. In 2013-2014 we had six 4-months tourneys, and the 2015/I was the first 6-months tourney. At the end of that period, I felt guilty about giving so much work to Kostas Prentos as the judge. Now, he writes in the award, “neither of us expected such a large number of entries: 169 original compositions and versions, by 57 composers”. 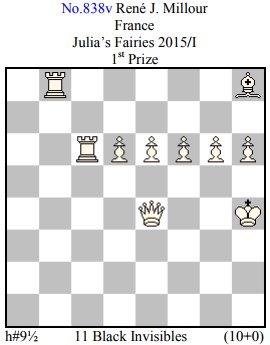 Today, it is time for readers to enjoy the Award of JF-2015/I, appearing like a booklet of selected problems… The 23 pages of the award include not only detailed comments for 40 rewarded problems (the comment to the 1st Prize takes 1,5 pages!), but also some remarks for 44 problems left out of the award… What an appreciation for the work of all composers!

And the last, more technical detail: the award you see was fully prepared by Kostas, with all the diagrams and links to original publications, leaving me without work… and words to thank him!

My sincere congratulations to the authors of rewarded problems and gratitude for all the comments, always highly appreciated by the authors and judges.

Congratulations Kostas,
for this very detailed and interesting award !

It is not allways the case…

Believe me, Sebastien, it is often very difficult to make detailed and interesting award. Only if you would value well puns on account of weak compositions…