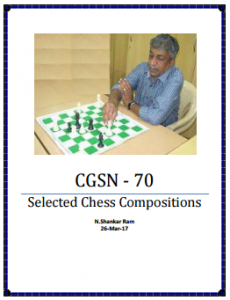 This e-booklet is a small tribute to CGSN, to celebrate his 70th birthday, which was on 24-Mar-2017. The 70 compositions included here form approximately 25% of his total oeuvre. I hope my selection captures his best and delights all readers.

CGSN, C.G.S.Narayanan, Chithathur Gopalan Sathyanarayanan is one of the world’s eminent chess problem composers. His main area of interest being the orthodox 2-mover, in the modern style, with changed mates and cyclic relationships. He is also strong in the orthodox 3-mover, which he started composing in the late 90s. He also composes to a smaller extent in other areas like helpmates, selfmates and fairies. Whatever be the area, his problems are marked by excellent construction, originality, economy and good solving difficulty. He avoids the hyper modern style where the content takes priority over other aspects…