Some interesting information about Chris Tylor, our most active contributor to the Fairy Chess Classification Project: In December 1888, T. Fisher Unwin, the London publishing house, published a 112 page book of poetry called “Chess: A Christmas Masque” by Chris’s Grandfather, Louis Tylor. (Masque: a type of theatre entertainment including poetry, singing, and dancing, performed in England in the 16th and 17th centuries).

The British weekly The Spectator, in its 22-Dec-1888 issue, described the book as “A LITTLE poem, this, but dealing with great mysteries, and one which will commend itself to those who, like Milton’s fallen angels, love to reason of- ” Providence, Fore-knowledge, Will, and Fate, Fixed Fate, Free-will, Fore-knowledge absolute.”

In 2019, Andriy Frolkin and Viktor Kapusta published an article about this on Valery Kopyl’s site, in English and Ukrainian, titled: The Tylors: A Family Chess Poem Created in … 130 Years! and Тайлори: родинна шахопоема творилася… 130 років! (http://www.chess-kopyl.com.ua/ua/novini/978-svitova-antologiya-shakhopoeziji).

Viktor and Andriy quoted this book as a new addition to their anthology of world chess poetry. And with poetic license, they said Chris’s work in chess problems was a creative link to and a continuation of his Grandfather’s book!

The book has been considered culturally important and has been reprinted recently. A public domain PDF is available here. 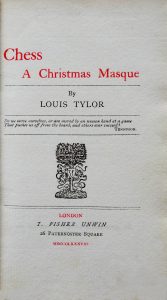 Somewhat in the spirit of Lewis Caroll, it starts with a dream by a boy who falls asleep on Christmas eve, before a chess board and sees the chessmen start to move and speak. Here are some excerpts:

A pleasant dream. Me thought the smooth square board
Grew rugged as the chequered field of life;
My chessmen took a human shape and moved,
The White with purpose good, and the Black with ill.
….
When the play is over, and the match is won,
Times of joyous contest ended, joyous rest begun;
Then the players, foes no longer, only rival friends,
Drink a parting health together; So the evening ends
When the play is over.
….

Read the full book from the link above, or better still, buy a hard copy online!

Published with a gratitude to the initiator and author of this article, the soul of Fairy Chess Classification Project, Shankar Ram! (JV)