Something quite different from me here:

No.40 – hs#2.5 by Julia Vysotska – Andernach Chess. This problem I’ve composed in memory of my grandmother, Anna Andrejeva, who would be 95 today. She was a very strong woman with lots of energy, the “head” of the family supporting everyone and restless herself. Two strong pieces are playing here for her.

The Definition (later will be added to the Terms page):

Andernach Chess: A piece (excluding King) changes its color after any capturing move.  Rooks on a1, h1, a8 and h8 can be used for castling, provided the usual other rules for that move are satisfied.

No.40. Аn interesting problem with duel between two Queens! This idea is somewhat paradoxical, of course. All 4 captures of the Pawns (Qxb4, Qxh4, Qxc4,Qxe2) here have a strong thematical and specifical (Andernach) character. A good additional “introduction” to this theme is black key-moves which open lines – I think that this is an unusual Annihilation, because after these moves the black Pawns like disappear from the board but the white Pawns remain again on the fields c4 and e2!

Here I won’t speak about the improvements of this problem, although such improvements are probably possible. I think this composition induces ideas for some other, similar interpretations, which may exist as independent originals.

By the by, the condition “Andernah Chess” is not common in the genre HS# and this fact is surprising for me. So, more detailed analysis can be useful here.

In my comments I always try to give to the readers some materia for their own practical work. One happy possibility is that the site Julia`s Fairies is an excellent platform for experimentations with any fairy ideas! Of course, here I can propose only a small number of ideas which are more or less connected with No.40.

Please, pay attention to the following possibilities, making analogy with No.40:

A) It might be interesting to try realization of the same contents bus using another thematic duo of pieces! For example, theoretically a realization with two Nightriders is also possible; same thematic you can also demonstrate with Bishop and Queen, etc.

B) The captures with main importance in No.40 are Qxb4, Qxh4, Qxc4,Qxe2 – here these moves change colours of capturing Queens. Interesting is to try another interpretation: also with 2 Queens, but with 4 captures which have a double effect: a) change colours of Queens; b) open lines for some black or white pieces (Annihilation). Here I offer just a simple scheme about this possibility (Scheme A):
1…Qxf4 = wQ 2.Qxd4 = bQ Qc3! 3.Qc1+ Qb2# (not possible is 4.QxQ – self-check!) 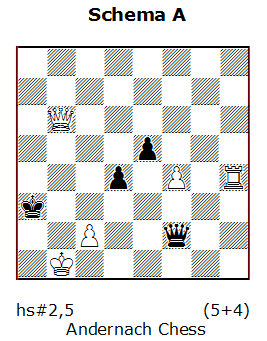 In scheme A both captures (on d4/f4) are Annihilation captures (or so called Passive Annihilation) because after that the result is line-opening for the w.Rh4! Can anyone realize this idea in two phases?
C) In No.40 the captured Pawns are static, but another trick is also possible: not captures of static Pawns , but captures after active white and black sacrifices! See scheme B: 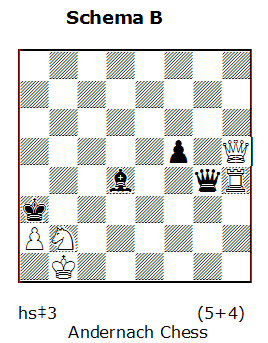 1.Sd1! – active sacrifice of w.S! 1…Bh8!! – also active sacrifice, but from the black Bishop (not 1…Qxd1=wQ? because here White have no good move!)
2.Qxh8 = bQ Qxd1= wQ 3.Qc1+ Qb2# .
But here also two solutions (as minimum!) are needed!
A theoretical note: here we also have Annihilation but fo other type – Active Annihilation, because sacrifices of Sb1 and Bd4 open two lines – diagonal c1-a3 and 4th horizontal!
It’s more difficult to realize two phases here in comparison with scheme A, but I think that this goal is real!

Very nice problem with intriguing and interchanging queen transformations. The problem is very good as it is.

I just thought a different effect can be produced (instead of just line opening) if the black pawn d5 were shifted to b5. Now the reason for the first black move will be quite different, ie. vacating b5 to enable check by the white queen on the third move, since the pawn at b5 will prevent white from checking on b5 !! This effect will be thematic for the Andernach chess. Of course no matching move for the other solution is there.

Another interesting possibility is to remove the pawn b4 also (after moving d5 to b5) and have the black first move 1…b4 ! (an active sacrifice suggested by Mr.Petkov). Obviously Julia would have thought of these and settled for ‘ line opening’ due to lack of matching move in the other solution.
Just loud thinking!