I’m happy to see one more author from Italy! – Welcome to Gabriele Brunori!

Anti-Andernach:A piece (excluding King) changes its color after any non-capturing move. After capture, the piece retains its color. Rooks on a1, h1, a8 and h8 can be used for castling, provided the usual other rules for that move are satisfied. After castling, Rooks do not change color, If White makes a non-capturing move with neutral or halfneutral piece, that piece becomes black and vice versa.

You can сlick on “Solutions” to show or hide the solutions!

63 by Julia shows a very nice idea – Reciprocal battery formation by N/Q. This main idea may perhaps be shown without Anti Andernach. . But the additional features of black queen and rook changing functions makes the problem very interesting.

62 by Brunori is neat demonstration of Lion moves !

Julia desired that I show some possible versions without Anti-Andernach condition. Here are two of my attempts. Of course these are not improvements of the very nice No.63 as they leave off some of the interesting effects retaining just the bare idea of mutual Anti batteries. Since the two main thematic pieces change color during color, I thought why not use black pieces itself. Here are the results:
[img 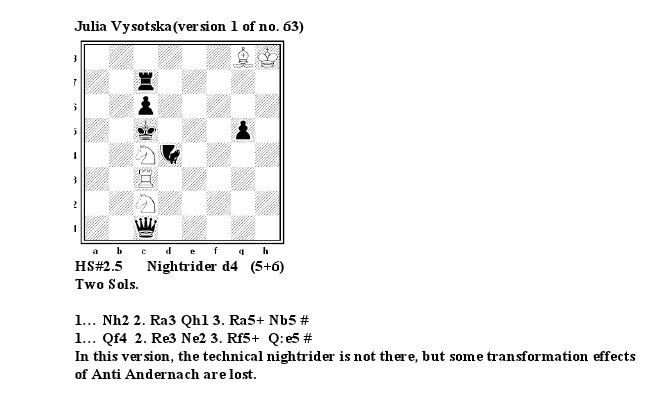 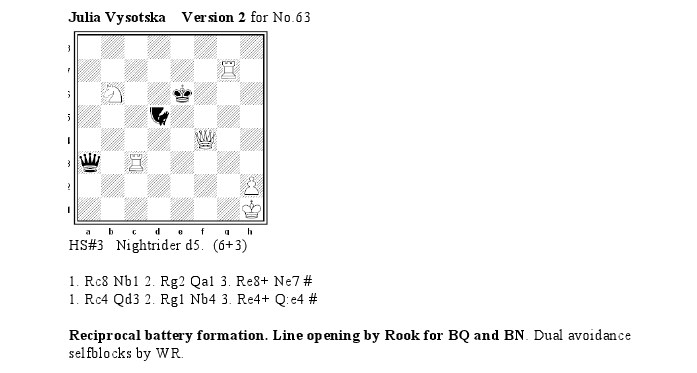 Well, I wanted you to show at the site the versions you have sent to me! 🙂 And you did! Thanks a lot! It might be something interesting for the others to discuss as well!

I think the main question here is: if the fairy condition should be used in case if the same thematic can be shown without it? I believe, that fairy pieces or conditions shouldn’t be used in case where it is possible to avoid them. On another hand, isn’t it different if the condition gives some additional thematic to the problem? In my problem I wanted to show the Anti-Andernach effect in a play of bQ/bR combined with a battery play.
But version by Mr.Seetharaman are also nice with a very good technique! I think that it is complicated to compare them with my original version, but they are quite good themselves!!
Thank you, Ram, for your interest and ideas!

I’d like to hear the other opinions as well!

I’d like to show here the version I’ve got from Peter Harris (I’m allowed to):
“I guess the main thing I wanted to achieve was to get rid of the Ng8. It is of course the Nd4 that is at the heart of the problem and the other is really a distraction – for it gives an expectation that it too will play a moving part – but all it does is block g8 and guard c6.” (P.H.):
[img]http://www.ankona.ch/diagrams/99959.png[/img]
hs#3; 10+4
Anti-Andernach
Nightrider d5

———-
(JV) I’m thankful to Mr.Harris for all comments I have from him!
I think that technically the version above looks very nice! The main differences: the second N is taken away, no initial white battery with the white Q.

What is better?
Waiting for your comments! /julia.

No.63 Julia Vysotska
An interesting problem that causes many comments.
About the theme, my opinion is: the use of Fairy condition Anti-Andernach condition is justified here by the curious motif – reciprocal captures of Qb5 and Rd5 after a change of colors of these figures. The formation of reciprocal black batteries N/Q and Q/N after white moves is not a miracle here – we know that the same can be created also after black moves – without use of Anti-Andernach. But in combination with the play of black Q/R, the creation of black batteries in №63 is a good motivated idea.
Another small but interesting detail in № 63 is the destruction of the initial white battery S/Q. Without this motive it would be possible to create a problem with 13 pieces – scheme № 1: 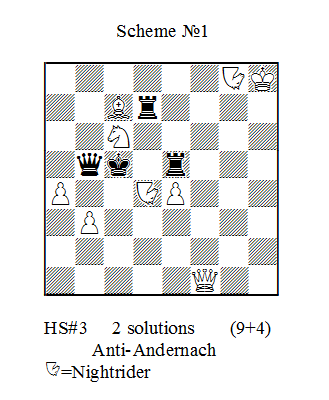 Which problem is better – № 1 or № 63? It is not easy to answer this question. As a subjective position, I can say that № 63 is better. Although here the white battery S/Q is only virtual, this small thematic motif is nice – the Queen stands better as a rear battery-piece on c1 as in scheme № 1.
The most interesting and controversial question in № 63 refers to the role of Ng8. This figure has many functions: blocks “g8”, keeps “c6”, controls diagonal a1-h8 as a “cook stopper”. Nevertheless, Ng8 is obviously a technical fairy piece. According to the some classic (but not official!) criteria, such figures are unwanted elements in a problem.
I think that this classical interpretation is also debatable, but this is a big topic and it could not be discussed here. I can only tell that in many so called “Alphabetical problems” (#2,#3, etc…) we see on the board a lot of such technical pieces, but most judges do not consider them as a weakness.
My personal opinion is that in a chess problem of any type, a fairy figure “X” can perform technical functions under the following conditions:
1. There is no other way to solve well a technical (constructive) problems in our composition;
2. Other fairy-pieces of type “X” (or even from family “X” only) exist on the board as a thematic figures;
3. As a technical component, ”X” performs sufficiently active function(s). In this respect is good, when “X” performs more than one technical function, for example: blocks, keeps squares around the opponent’s king, plays in additional (non thematic) variations, executes some non thematic tries, etc.
The main, specific questions related to № 63 are two: 1. Can Ng8 be removed from the board? 2. At what price it can be realized?
The second question is very important because a new version (without Ng8) which have other, major technical and thematic minuses, cannot be a step forward.
Peter Harris offers an interesting version – № 2 in which Ng8 is absent (the number of pieces is the same as in № 63). 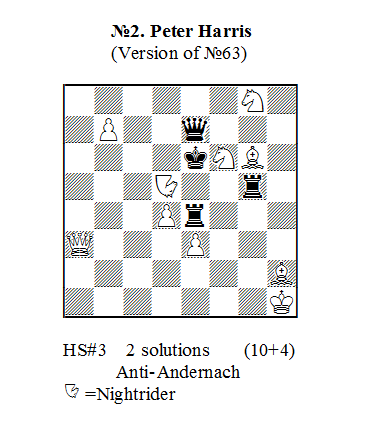 №2: 1.Nd5-b1(N) Re4xd4 2.Qa3-a1(N) Rd4-d7(B) 3.Rd7xe7+ Nb1xe7#
1.Qa3-d3(N) Qe7xb7 2.Nd5-b4(N) Qb7-a8(B) 3.Qa8xe4+ Qd3xe4#. Here the unwanted Nh2 is changed to a white Bishop – at first sight, a good idea!
In №2 we have total 4 technical white figures: Bh2, Bg6, Sf6, Sg8. The number of technical figures in №63 is only 3: Ng8, Sc2, Bc7.
In other words, the bad Ng8 in №63 is eliminated in №2, but of expensive price – instead of Ng8 in №63, in № 2 are placed on the board two new technical white figures: Bishop and Knight. In my opinion, these pieces are not sufficient compensation for the removed white N.
In №2 there is no initial white S/Q battery, through this element can be only a small plus of №63. Another but also not big thematic weakness in №2 is the imbalance between the two solutions in thematic aspect. Obviously, the second solution is minimal better – the black Q captures wP, creating a new R/Q battery, then Q plays along the same thematic line and destructs this battery. These little, but sympathetic motives are absent in the first solution.
On this reason, I think that №2 can not be acceptable as an improvement of № 63.
But Peter’s idea is fruitful and deserves attention – as a basis for new experiments! For example, analyzing № 2, I’ve found a position in which the economy of white pieces is better – №3. 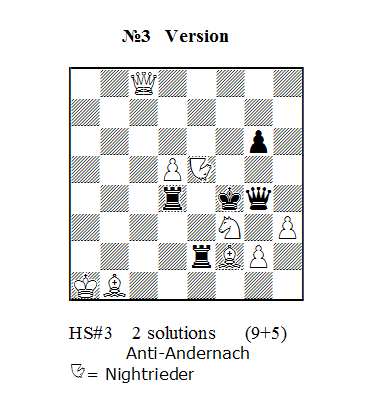 Interesting are comments of Ram, who believes that the contents of № 63 (somewhat) can be realized without the condition Anti-Andernach. It’s true – the reciprocal formation of Q/N and N/Q batteries is well known as a theme of many old problems, which have not fairy conditions.
Seetharaman’s versions are good constructed but I think that these compositions stand far from the problem of Julia. To a certain extent these works may be autonomous, although they have many similar structure components in comparison with № 63. But I think that Ram’s versions can not be a basis for improving of № 63.
As almost independent problems these versions have a different value. The first position (Kh8/Kc5) is very economical but the white play is rather elementary – therefore, I perceive this position only as tentative scheme. By the by, here my recommendation is to try some schemes with black Ka5 and with Rook-check (s) on b5/e5. An interesting idea would be: two w.Rooks which realize interchange of functions: if one R blocks square around the w.K, other R gives check, on the contrary.
The second version (Kh1/Ke6) is a good problem, with interesting play of white Rooks. By the by, here the white strategy is “mixed” – different motives in play of Rc3 (line-opening) and Rg7 (self – blocks). Such method for creation of contents in HS# genre deserves interest.
Unfortunately, there is a minimal imbalance between the two solutions: in the first solution the Rook gives check and the Nightrider closes the Rook, but in the other solution we have sacrifice of the Rook and capture by the black N. In my practice I fix such defects, even at the expense of more material.
In my opinion, this problem is possible to publish as original from Ram with an additional note, for example: “After Julia Vysotska”.

Thanks Mr.Pekov for your analysis. As I already stated in my comment, I only attempted to show part of Julia’s idea. It not at all an improvement, missing the interesting “mutual transformation and capture of BQ/BR”. Based on your suggestion I have made a version with White rooks exchanging function and sent for Julia’s consideration.

With regard to the Ng8 in Julia’s No.63: I wanted to get rid of it because I thought it DETRACTED from the value/significance of the d4 N. I thought the Ng8 was a DISTRACTION. It holds out a hope that it too will take an active part in the play but this is a FALSE EXPECTATION– it just sits there. [No riding for this piece – night or day]. The best I could do was to replace the N with a Bg8 and add an S. Now in deciding whether this change is worthwhile one should not simply say 2 > 1 therefore not worthwhile. This presumes everything else is equal – when they are not. Using this arithmetical approach, the matter should go further and not stop at 2 > 1. The question to be asked is: is 2 MINUS 1 worthwhile? This is the price to be paid to have a solitary N on the board.

No.63. I’m so pleased to get all these comments! Thanks a lot to Mr.Petkov for detailed analysis! Also, I appreciate a comment by Mr.Harris! It’s very interesting to study the opposite views and ideas. I like this lack of a strict set of rules in composition, the creative moment, and a certain amount of subjectivity.
Myself I think that it’s not always easy in each concrete situation to decide which point of view to choose. But it’s very useful to see these views as much as possible to have a basis for my own, which are “under construction” for now. 🙂

It’s always a pleasuse for me to see the activity of Mr.Seetharaman! I like that my problem has given some ideas to you and that you share them with all of us!

For now I’m going to leave this problem like it is, without changes, but I appreciate all the comments I’ve already got and will be happy to get any new! Please, critical comments as well – as this is the only way to learn!

Thank you very much!! /julia