PWC – When a capture is made, the captured unit (except a King) is replaced on the square the capturing unit just leaves. A Pawn is immovable on its 1st rank.

You can ?lick on “Solutions” to show or hide the solutions!

Thank You for your dedication, dear Michael!
I think that this three-men composition – with two super surprising model mates in distant parts of the board, is a unique problem! I hope that the readers can analyze in depth this phenomenon.
In set-play the final mate-position looks like: 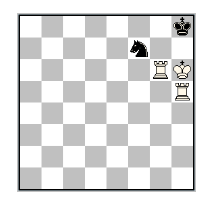 In real play this beauty picture is repeated at the bottom of the board:

As it can be seen, none of the figures that stands at the beginning of the board, did not participate in these finals!! The work with three fairy conditions: PWC, Einstein Chess and Republican Chess 2, leads to this unique transformation of power.
Obviously, it is very difficult to achieve such effects – many people assume that such problems are composed with computer programs. This is theoretically possible but practically seems still impossible nowadays – in relation to problems with big number of moves.
In this respect, I can firmly say only the following: Michael Grushko has many compositions of this type – this is proof that he is very active in this field and his mastery has reached the level of virtuosity!
By the by, I can also say that many composers underestimate the fairy condition Republican Chess which do not occur often in practice. There is a large pool of new opportunities.