See  Part I in the Theoretical Articles Category

Why we should pay a special attention to the Locust fairy piece, developing our main theme? Indeed, some examples were already shown in the first part of this article!

My answer is: although the Locust is not a new piece (its modifications, like Rook-Locust, Bishop-Locust etc. are well know in practice), I think that there’re arguments for even more complete examination of this piece in relation to this topic. More specifically:

a) We are talking about neutral Locusts, but the are not much used in practice, when the problems don’t contain any additional fairy conditions.

b) Many effects of these pieces are little known, and some of them, which will be discussed later, perhaps are very little used, or even never met until now.

c) In some modern genres – for example, HS# or HS= fairy problems, neutral Locusts are still poorly used and there is a huge practical reserve.

d) In theoretical approach it is interesting to examine a number of issues here, that are not clarified in the theory of fairy problems, meaning in reality, that the term “theory” is very relative in this arena. It is well known, that up to now such a theory – in a form of a serious, complete scientific and practical work – doesn’t actually exist.

e) The central theme of this article – block of neutral battery piece – has a particular importance, since exactly this motif, as it was already mentioned, interferes with the side which gets mate, to protect itself by escaping a neutral piece, which we have named “X”.

f) Since this article has a strong practical emphasis and is also planned for the wide range of readers, especially – beginners, many motifs here are explained with only a simple diagrams, which demonstrate the important basic effects the readers can apply in their work.

So, let’s continue with the series of examples, where Locust is a forward piece or rear piece in a different batteries or anti-batteries.

As a forward piece, neutral Locust can demonstrate an interesting effects – it opens the battery, but at the same time the side which is in defense captures the rear piece with the same neutral Locust and the goal can’t be reached immediately. Thus, blocking of piece “X” which is implemented by the own piece or by the piece of the other side, prevents the piece “X” from the capturing of the rear battery piece, destructing the battery. One such an example you’re already seen in the part I – problem No.6 – a fairy twomover, where “X” acted as a forward piece in the direct battery, but in No.7 – as a forward piece in the anti-battery, although there was just one solution.

Let’s continue a little bit with the examples of this type. 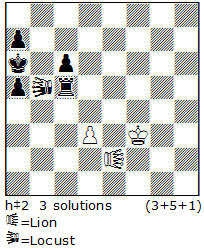 In No.9 we can see that the battery is going to play. The battery is created by the following pieces: nLOb5 – forward piece, LIe2 – rear piece, Pd3 – a pawn, which has only technical functions from the first view, although without it it would be impossible to create our battery. At the beginning let’s try this idea for the solution: 1.Rc3 ~ 2.Rb3 nLOxb3-b2+? – but here we see already known defense by the black: 3.nLOxe2-f2+! – capturing the battery-piece LIe2.

It’s not difficult to guess, that white (for now we haven’t defined their first move) can block the square f2 — and everything will be fine. Thus we have: I. 1.Rc3! Kf2! 2.Rb3 nLOxb3-b2#! But the problem has 3 solutions — let’s see what’s going on.

Analogical ideas by the black Rook we can implement also with the moves: 1.Rc4 1.Rc2. But suddenly, the very important role here has exactly our pawn on d3!

Now it’s a time to speak again about the white pawn, which participates in the creation of white battery, but is not named yet. Of course, any names are possible and it is not that important from the practical view. Let’s name it tool battery-piece or shortly TBP.

The conclusion we have here is:

а) Pieces and pawn of TBP type – can be often found in a batteries, where a fairy pieces of Нoppers type participate in a battery creation. In case of direct battery creation with a Hopper rear piece, almost always the TBP pieces are applied and in most cases they are pawns – of one or another color.

b) Usually, such kind of pieces in most of problems neither do any move, nor are captured. In the other words, they’re pretty static.

c) In which casesTBP-piece is considered as a bad piece in a problem? In case if TBP is a pawn, such a question is almost never worth. Another case, if white or black piece acts as a TBP. Then the actual question is – if this a piece, although needed in the battery construction, does it stay well on the board?

My answer is the following: if TBP is a piece, not a pawn, then it stays a little bit bad on the board in case if it acts only as a technical element of the battery. Therefore, we should try to add some additional, thematic or incidental function to our TBP! This is very important from the aestetic point of view!

For example, in our studied problem No.8 – the white Sd8 acts as TBP. But it is not a bad piece, as it has also the additional function – it guards the important square b7!

A better usage of TBP is shown in problem No.9, where pd3 acts as a TBP, and the play in 2 solutions is based exactly on the impossibility of capturing this piece!

Of course, in No.9 it is possible to remove one of the solutions and, replacing black Rook with a Bishop for example, to compose a version with just two solutions, where the blocks are done only by the white King next to the TBP-pawn. Thus, we got the scheme No.10: 1.Be5 Ke4 2.Bb2 nLOxb2-b1#; 1.Bd6 Ke3 2.Bb4 nLOxb4-b3#. By the way, here (like in No.9 as well) a Bishop-Lion also can act as a white rear piece. 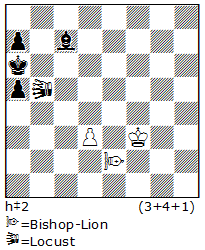 Now let’s look at some special cases, where two neutral Locusts are on the thematic battery line.

According to the battery rear piece, two neutral Locusts can create the following batteries, which deserve a special attention:

Let’s look at the typical schemes:

In a scheme No.11 a thematic battery consists of 3 pieces: forward pieces –nLOf3 nLOd5, rear piece – Lion a8. Of course, it is possible here to use some other piece of Hoppers type on the square a8: LEO,VAO, Bishop Lion etc. 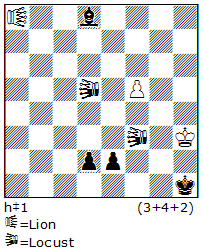 To realize H#1 is only possible blocking the squares g5/f6. Thus, a static Locust in a role of TBP-piece doesn’t have anymore an opportunity to capture the white pawn and to destruct the battery: 1.Bg5 nLOxe2-d1#; 1.Bf6 nLOnxd2-d1#.

It’s even more interesting, when during a play the both neutral Locusts are blocked, as it is shown in a problem No.12.

It’s not difficult to see, what kind of plan should be implemented here: the black Queen is sacrificed with the aim to give an opportunity for the neutral Locusts to move on vertical g. This way they give double checks with a mate. 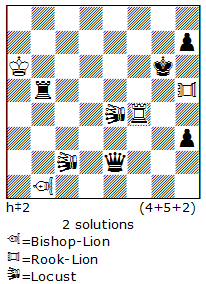 A block of two thematic Locusts is a very nice interpretation of the theme, but it is always good if a problem has also some more interesting motives. Here they are: a) sacrifice of a black piece (it’s almost a standard motive in such a schemes); b) destuction of a black battery R/Q – the very important and interesting idea, which define the order of the black moves! 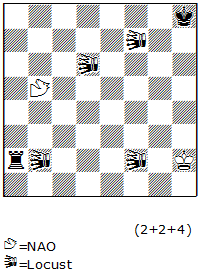 Very often, using modifications of the standard (Queen-type) Locust – like Rook-Locust, Bishop-Locust etc. – it is possible to compose an interesting problems of different fairy genres. 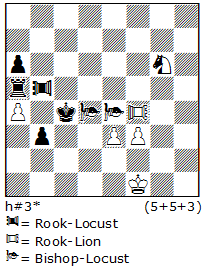 Please look at the diagram No.15 – at the first glance, a very familiar, easy position. And yet, here’s something very interesting and different to the previous examples in the section A). A stipulation #1 is realised here in a very peculiar (original) way: 1. nLOxe5-f6#! 1.nLOxd4-c3#! 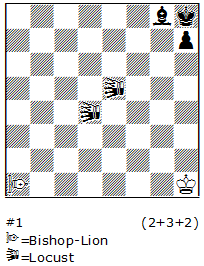 THE FIRST QUESTION: What’s this? Is this a direct battery, half-battery or anti-battery play?

THE SECOND QUESTION: What practical chances this mechanism gives for composing good problems?

The answer is: The chances are simply beautiful, but it’s needed here to complicate the central motive with the other motives, among which a blockage has a central place again! 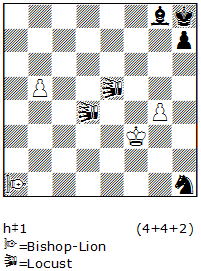 In the light problem No17 we can see a complex of motives: block of squares c1/d1, realized by the black Queen, Annihilation captures of pawns c6/g7, Zilahi theme, model mates. I. 1.Qxg7 2.Qg1 3.Qc1! nLOxf5-g5#; II. 1.Qxc6 2.Qh1 3.Qd1! nLOxe5-d5#. Our well-known special battery here is modified now, using the white pawn on the thematic line and a Kangaroo piece as a rear piece. 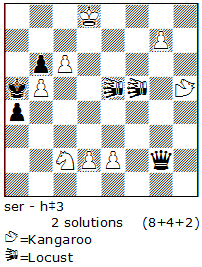 In the next, the 3rd part of this article, we’ll look at some other interesting batteries with Locusts!

I think there were previously comments to this article. Probably gone with software update