No.342 by Julia Vysotska – Anti-batteries, reciprocal play of two pairs of pieces, Take&Make with activity of the white King! (JV)

No.342.1 by Julia Vysotska, Dmitri Turevsky & Georgy Evseev – Improved version of problem No.342 -Take&Make effect in 3 half-moves of 4, improved interplay of black and white. (JV)

Very nice problem with interesting mates by neutral pieces. Nice dedication. My best wishes to your mother. Does she know chess ? 🙂

Thanks!! For several evenings I couldn’t find a positions for 5 main pieces in this problem (wK, nPAO, nVAO, B, R), because of cooks and move order, and yesterday’s morning (mother’s birthday) suddenly have found! So came the dedication.
Well, my mother can play chess on a hobby level, as most of people can. She’s not interested in composition itself, but as any mother she’s happy for me, that I’ve discovered it for myself and that it gives me so much.

Not many can play chess even on hobby level. Surprisingly my grandmother who was just literate could, but not many of my close family members!

Are you sure the twins are needed?

I’m not, and I don’t like these technical neutral pawns as well. But for now I can’t improve. Adding more powerful white to guard 2 King’s squares, or one more half-move to do it produces too many cooks I can’t avoid. Do you have an idea?

Not an improvement, just quick test on how unavoidable those cooks are 🙂

can’t stop thinking about it…
Actually, Pa7 is a very good one! It’s needed in the both solutions, and the nice Take&Make effect of it is block of a7 square – the black King can’t capture it as it would make him move to a8 again! It’s a pity there’s not the same about Pa6..

Maybe you can improve it. Best wishes to your mother!

Thanks for all versions! But I have to think if the version with pawns is optimal. All versions have their minuses…
Dmitri’s version is something I’ve tried as well, but too many black pieces are needed to stop cooks. Version by Themis has an imbalance in solutions where again in the 1st solution b8 is guarded twice and a King has two functions. And, Themis, I simply like my pair of pieces B/R and their reciprocal play!

It is possible to remove two pieces from Dmitri’s version (-Rf8 -Pg2 -Rh1 +nQf3). There is only single set of cooks with wQf3 but I have not tried to get rid of it.

Not using neutral pieces as guards was the point. I have quit just as i had found the sound setting. Anyway the self-guarding pawn a7 is superior in every aspect.

What bothers me slightly is that to sequence the black moves 1.Rc4-e4 is an anti-critical, while 1.Bc3-d2 is a gate-opening. I would prefer two anti-critical moves. Here is the quick sketch:

VAa2 is ugly, perhaps something can be done about it.

Twinning can be done about it:

The position may be suboptimal yet.

This is a very nice one!

Now this is a real helpmate with black and white cooperating, not just playing their own parts!

Three out of four moves (in both phases) are typical Take&Make. I like this light version. White K is stop-cooking.

I also like this one! Just the second move 2… Sc5*d7- bothers me as it is the same in both solutions. Although, the 2nd part of the move is different…
I was thinking about publication of some the best version, but I’m not sure if this one is final.
On the other hand, I don’t have any ideas about improving it, but while discussing this problem I’ve decided to try another pair of neutrals and composed a bit different problem, No.345.
To Themis: a black Q, as you’ve suggested here, is quite good there!
Anyway, thanks a lot for all comments and suggestions! And of course I’ll be always happy to publish the final (joint)version here!

Somehow I never tried this position with black Pa7, though have lost a lot of time trying to remove white knight and hoping to use white king as forward piece in antibatteries.

1. Square d7 is critically important for all the moves in both solutions.

This kind of zilahi is also possible with andernach or magic families of elements for example. 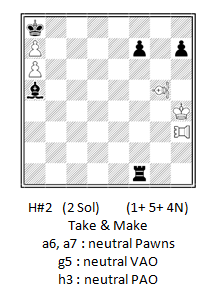