No.838 by René J. Millour – An Invisible world is revealed by a wK-march and a very strange black collaboration!

The Invisibles are not programmed, the problem is C-, and no animation is possible here. I keep the same abbreviation “I” as sent by author and also used in 9th Japanese Sake Tourney. See also René’s problem No.675. (JV)

Definition sent by the author:

Invisibles(I): Beside ordinary units, a given number of Invisible pieces are on the board, their identity and whereabouts being not known. Moves are played so as to determine partially or totally the identity and location of the Is, in order to finally achieve with certainty the stipulated aim. An I may play a quiet move denoted 1.I– (a priori we don’t know which I moved to what square), or may capture a visible unit (1.Ixd5) to show its arrival square. An I remains I until both its identity and whereabouts are determined, in this case it is revealed and becomes an ordinary piece. The notation expresses what we know, and only what we know, all must be deduced, not simply asserted through the notation. 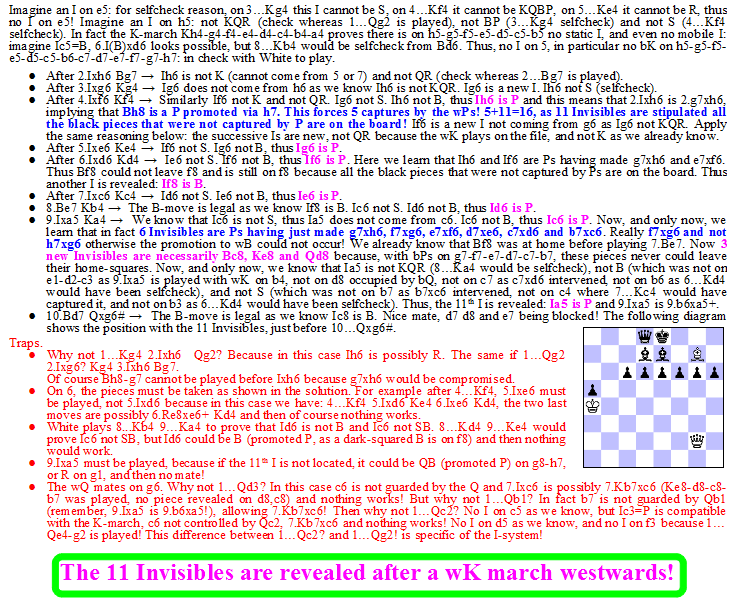 A first version of this problem was published on Eteroscacco website, in September 2009.
In December 2009, Eteroscacco ceased all publications.
Later, I found a cook, but also a correction! As the corresponding award was not done (…it is not done even today), in March 2014 I sent to Marco Bonavoglia the email I provide (in main part) below with Marco’s answer.

CONSEQUENTLY, THIS PROBLEM IS COMPLETELY ORIGINAL FOR JULIA’S FAIRIES!

I recently cooked my “h#9 Invisibles”, …
I also corrected it, even with a more economical position – 10 pieces on the diagram instead of 14 – in which …
All in all, in my view the content is improved!

Is it still possible to replace the cooked version by the corrected one?

All the best wishes!
René

dear René,
… I think it’s better to consider the problem cooked and you can publish the good version somewhere else.
…

all the best, Marco