Let me show you 4 originals here.

The first two of them are my own – in the both cases I use a special nature of the pieces to create reciprocal batteries:

No.5 – neutral Locusts as a battery pieces;

No.6 – neutral and white chameleons as a battery pieces.

And it’s a honor for me to publish here the another two originals – the both by famous composer Petko A.Petkov:

No.7, No.8 – rich thematic complexes with KoBul Chess.

Locust (L):  moves on Q-lines but only by capturing an enemy unit, arriving on the square immediately beyond that unit, which must be vacant.

KoBul Kings – When a piece (not a pawn) of his own side is captured, a King transforms into a Royal piece of the same type as the captured one. When the King is in the form of any Royal piece and there is a capture of one of the pawns of his own side, he becomes a normal King again. Сaptures are illegal if their result is self-cheсk because of the transformation of the Кings according to KoBul rules. Castling is allowed only if the KoBul King is on his initial square in the form of a normal King and if he has not already moved; however he may already have been transformed. In the case of capture by a King in AntiCirce he is reborn on his initial square and may castle. If the capture is by a King which is in the form of some Royal piece, he is reborn on the initial square of that piece (the definition from www.kobulchess.com). The perfect examples of KoBul Kings you can see in the Award of KoBulChess TT 2012.

The diagrams are made on WinChloe and it’s Echecs font is used for Logo design.

Nice Reciprocal batteries. Neat use of Neutral Locusts to give single check mates, rather than double check which is a must for other neutral battery mates!

At cost of one piece the following position is in the two-solution form and with model mates (if I’m not mistaken), although the first move is not made by neutral locust(s), but by neutral knight:

There is still some hidden potential in the scheme.

Dear Juraj,
Thank you for your version!! I like the idea to make h#2.5.
I’ve put your notation on the diagram – for everyone to see it: 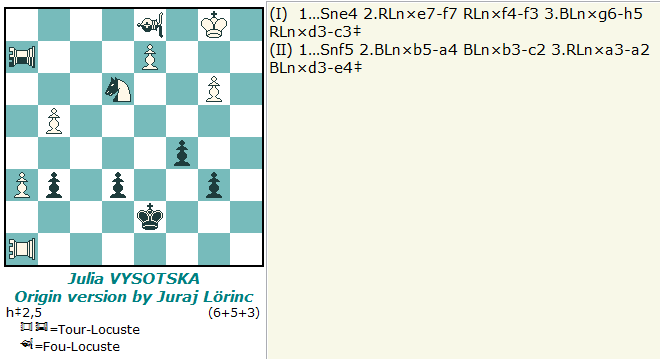 But the moves of the neutral S here in the both solutions are like white moves. I’ve tried to change it to the white S, but there’s one cook then. But is it right to use a neutral piece in such case? Thanks! Julia

That is difficult question and the answer depends on individual preferences in my view. Some people prefer using as little fairy pieces as possible in the problem. Others (including me) treat fairy elements as normal available constructional material if they are needed for the core of mechanism. Here neutrals are already used, thus my choice would be nS. My reservations regarding the present position concern RLOa1 that seems to be out of place, even if acceptable technically. I was trying white rook, but the looming cooks made me choose safe option for the sake of showing the position.
By the way, WinChloe now reported to me hitherto neglected feature of mates – mirror model mates are valuable.

I’ve changed this my scheme from No.5 for hs# problem – see the original No.14, page-4 – https://juliasfairies.com/problems/page-4/
Also, without twins! /julia

Interesting question from Julia. Is it ok to use a neutral piece or use white Sd6 (at the cost of an added white pawn c4 for curing the cook)? I think I would use the neutral knight, rather than use an additional white pawn — as the nS merges well with the rest of the problem.

About No.5 – thanks to Juraj Lörinc! And I’ll think also myself about the other possibilities to make h#2,5. But for now I’ve added one more problem here – No.6. Composed today. But actually, composing No.5 I was thinking about if it’s possible to realize something similar with chameleons. Couldn’t do 2 neutral chameleons. So, one is white there. A bit different solutions. Is this ANI-problem?

Another nice original from Julia, showing us the possiblites in batteries!

Very happy to add 2 more originals to Page-2 – by Petko A.Petkov! I believe, you’ll enjoy them!

Dear Julia, the correct note under the diagrams is “KoBul Kings” instead of “KoBul Chess” 😉

Dear Diyan,
The inventor is always right! 😉
Thanks!! Have changed to KoBul Kings!

Two lovely problems from Petkov.
No.7 is a beauty with so much happening in only two moves — double transformation of black king and change of function of white batteries in both solutions !!
No.8 surprises with white sacrifices and Royal battery mates after white king transforms. Enjoyed the cross check play in both !!