No.71 – h#2,5 by Valerio Agostini – Development of the idea of No.70 – here the author demonstrates more kinds and effects of anti-batteries. (JV)

You can сlick on “Solutions” to show or hide the solutions!

No.70 has interesting lateral/diagonal mates, after selfblocks. Can it be done using only one lion, with pawns shutting off perhaps on c4/c6?

Dear Valerio and Seetharaman,
Please look at this variant:

Great construction Mr.Janos. Using same black piece for all the four moves was an excellent idea, removing other idle black men. The play is also unified, black providing a hurdle on first move and selfblocking on the second. Very economical too. Mmm………. I wonder if the Lions can exchange functions 🙂 🙂

Thank you, Janos, I like your idea!
To the first question, from Seetharaman, about using just one Lion – it is possible, but it would change the idea.
Let me show you the previous version of this published problem:
[img 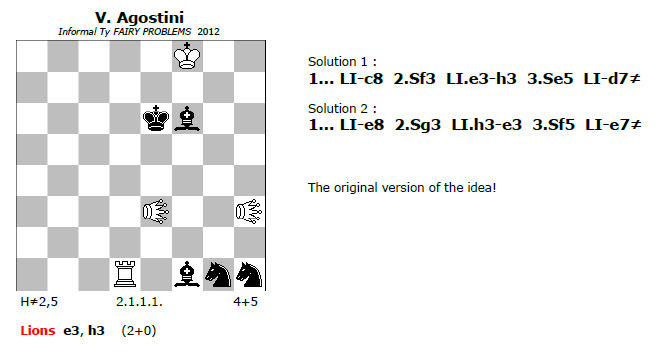 By a surprising coincidence, Juraj’s No.6 in Fairings 25 shows the idea using a single White lion and Anti battery mates with knight shut offs. (with Ortho/Diagonal echo) !!

Pure coincidence, of course.
My F25/6 was composed in 2004 and it has laid more than 8 years in my files unpublished.
But the mechanisms of Valerio’s problems are very different.

My vote will be for this version. Exchange of function of Lions and the White Umnov are both worthwhile features.

As I know, Umnov can’t be white or black. Umnov means that a piece of one color is leaving, and of another color – coming to the same place. Or am I wrong? In Russian, about the pieces of the same color, say “ушел-пришел”.
But the idea is really very nice!

Correct. Umnov to be paradoxical should be white immediately occupying the square vacated by a black piece – that too in a direct mate. That is how it was intended. In helpplay the effect is only ornamental.

And there are some chess problem lovers, who actually disagree with using name Umnov for such theme in helpmates at all. In direct mates there is paradox feeling (e.g. even entering square left by pawn is not considered Umnov by some as pawn does not threat back), in helpmates often hardly so, rather the opposite.
Btw, Umnov as a person was allegedly against helpmates, but that is another story.

Valerio Agostini
The following interesting problem of Valerio is actively discussed on the site (later we will call this task Version A):
[img 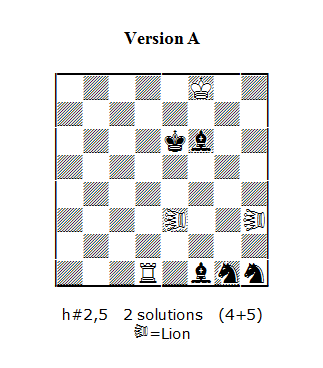 Without doubt, here the thematic is rich and pleasant – the theme – reciprocal creation of Lion/Lion anti-batteries is not new of course, but here we see some fresh and nice motives in play of Lie3/Lih3 (with reciprocal vacation of squares) and in a play of black Knights. An impressive design of Valerio!
At the first sight the construction is also good – “Aristocrat”, only 9 pieces on the board.
But nevertheless, I think that this is not the best version of the problem. The construction, although it looks perfect, de facto is unsatisfactory! Why? The firstcriticism is to the piece Bf1 – it is a typical “cookstopper” only. This figure is added on the board with one purpose – to eliminate the cooks. It has no other role.
Such technical figures are bad elements in every problem! Although necessary at the first sight, they spoil the overall harmonia! I think that the young composers and the authors with less experience, do not pay enough attention to this important fact. Thus they allow a big mistake that over time can become a habit.
But more concret: Is it possible in the problem of Agostini to remove the bad Bf1? My answer is: yes, it is possible and not so difficult to realize, for example – in a such position (Version 1): 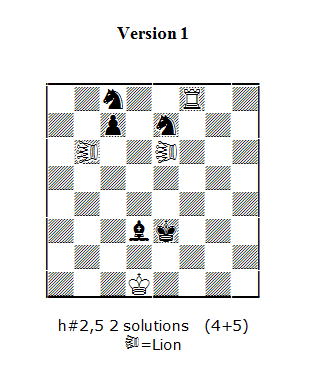 Version 1 is a step forward, to compare with the position of Agostini – here we have also “cook – stopper” but it is only a black Pawn (c7).
A common important rule: as cookstopper a black Pawn is always better than any other black piece (s)! A cook – stoper Rook is always worse than a Bishop or Knight in such role. The worst is a black Queen when it is put on the board only with one fuction – to eliminate cooks!
And now – a few words about the black moves in Version A. Here the two black Knights play good, of course – the self-blocks on e5/f5 are excellent elements, nice motives are also the dual-avoidance tries (2. Sg3?) and (2.Sf3?) .
But pay attention to one small flaw – both Knights are strong limited in their movements in initial setting, and the moves as Sf3 and Sg3 are almost obvious here – these figures should be put into play!
The activity of the pieces which execute the thematical moves, has great aesthetic importance! Do not underestimate this factor!
So, trying to improve version A, I put the following practical objectives:
A. To eliminate bad cook-stopper Bf1
B. To activate the black thematic pieces (both Knights)
C. To try schemes with other black piece(s) which execute the same black strategy as in the Version A.
For this my plan, I have done a “blitz-tempo” and I want to show what I received – Version 2:
[img 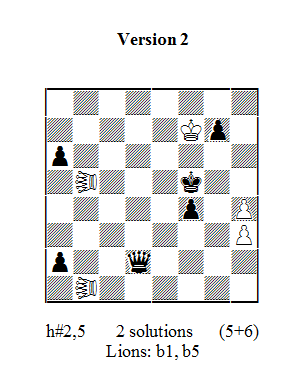 This position has 2 pieces more, than in Version A, but in my opinion, the play here is much more homogeneous and beautiful, no any technical figures – neither whitenor black! On the other hand, here the black Queen, which stands very actively on the board, excellently replaces the two black Knights.
Of course, possible are (probably) also other versions, for example – in three moves with addition of a new black half-move. This idea seems not so easy…But Valerio can find a new chances – he is a very ambitious and fruitful author from the new, excellent Italian “Fairy generation”!

Dear PETKO: thank you very much vor this beautiful lecture!!
I’ll try to do it….
VALERIO

Version 2 of Petkov is the best so far. When Janos suggested the version using the black queen I was wondering whether the function interchange of Lions could alsot be incorporated. And Petkov produces this beautiful version !! Very instructive. Thanks Petkov !

Well, I see two essential points in this thread.

The step from version A to version 1 deals with the economy of tehnical pieces. The step from version 1 to version 2 is even more important, it deals with the economy of thematical mechanism which presents the essence of the idea. The half-employed thematical black Knights are replaced by fully-employed bQ. We may notice that one thing is abandoned in version 2 and that was probably the author’s initial idea. In version A, the black Se5/Sf5 attack the squares d7/e7 where white Lions arrive in the mate, respectivelly. This might give the illusion of sacrifice but only to the “orthodox eyes”. Of course, the illegal captures Sxd7??/Sxe7?? would only change the hurdles without parrying the checks. Such an illusion does not seem to be worth the flaws in the economy.
So, Petko Petkov has shown again the meaning of a perfect mechanism (for the idea of version A).

No.70 fully justifies the doubling of white Lions on the mating line – when a black piece makes a selfblock it is also able to interfere on the checking line. Such dualism, a useful and a harmful effect of one move gives a tension to a problem, the mate alone is complex and the play is virtually extended – if the black piece would try to close the line of the rear Lion, it would make a hurdle for the front Lion -> another dualism of a useful and a harmful effect.

The following example shows also a paradox – the mates will be delivered from squares b6/e6 but not by the Lion which already stands there on the diagram. Virtually, wLIe6 should come to b5 and wLIb6 to d5, so the real solution shows a Platzwechsel of Lions in the mates.
Here, one tempo-try pretty convincingly shows the Platzwechsel on b5/b6, two good tempo-tries might be worth some additional material.