PART I – General rules for the white and black pieces

Disparate: If one side makes a move with a piece of type “x” (black, white, neutral, half-neutral, etc., King included), the other side cannot answer immediately by moving a piece of the same type “x”!

All these enemy pieces of type “x” are in a state of “half-move paralysis – HMP” (this is my term) which immediately vanishes after realisation of the following half-move from the other side, using a piece of another type “y”!

In Scheme No.1 the white piece in role “x” is Qc2, the black opponent of the same type “x” is Qg1. After 1.Qc1#! we have mate because according to the definition Qg1 is paralysed (HMP) and cannot answer with 1…Qxc1. Incorrect is 1.Qd1+?? because Black has a powerful answer – 1…Kb2#!! – mate to the white King because it is paralysed by the black King!
Of course, here White can also play 1.Kb2#! – with paralysis of the black King!
There is also an interesting try: 1.axb3+? with play of the white Pa2/Ra5 battery. But Black has a very good thematic defence: 1…Rh2!! and Ra5 is paralysed (HMP)!

Now follows many light but instructive examples by the inventor. 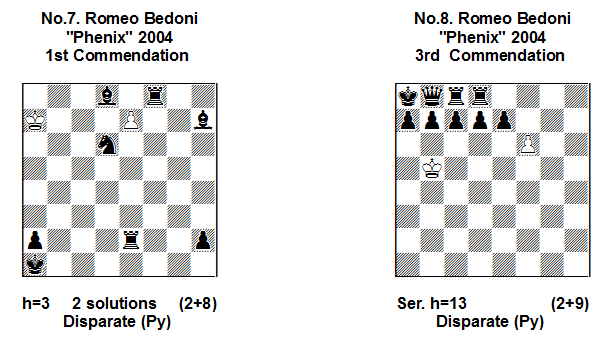 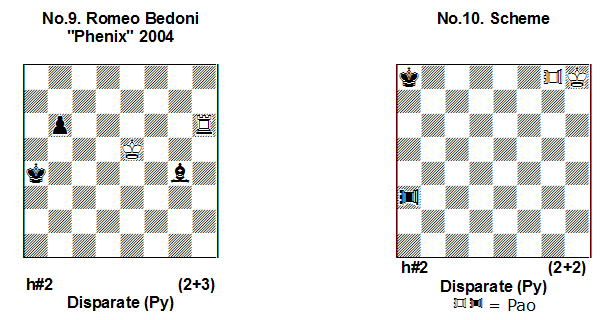 No.9 in elementary form presents a theme that has an important theoretical and practical importance: play of a battery that has a King as the forward (mating) piece! In this case the enemy King immediately comes under HMP and cannot make a move! 1.Kb5! Rh5 2.Be6 Kxe6#! – mate, because Kb5 is paralysed by its white opponent! Of course, here 1.Be6? Rh5 2.Kb5? is wrong – now Ke5 is under HMP and the move 2…Kxe6# is illegal!
Similar motives exist also in the play of anti-batteries.

a) Paralysis (HMP) after Pawn promotions

In Scheme No.11 White wants to mate with b8=S (it is a Pawn move, not a Knight move!!) but after b8=S+ Black could answer with Sa4~! and Sb8 is paralysed! Therefore it is necessary to play: 1.Sxb6! b8=S#! because here the b.S is pinned and cannot paralyse the w.Sb8.
In other words, here the piece of type “x” is the black S and after its move the Pawn mates with a promotion also to a piece of type “x”!

Another instructive example is No.12: I. 1.Bc2 a8=B+! (this move is possible because it is a Pawn’s move!) 2.Bb1!! (HMP of w.Ba8). Now follows mate after activation of Ba8 (destruction of its HMP) and capture of the black Bishop: 2…Kxb1#! This capture is needed because without the Annihilation of the black Bishop Black would have a defence on the third move 3.B~! with paralysis of Ba8. Analogically: II. 1.Qe2 a8=Q+! 2.Qb2+!! Kxb2#. An additional motif here is the black half-pin. There are model mates after specific play of the white “special battery” created from w.K as the forward piece and the promoted white piece as the rear piece!
Very interesting modifications are possible to this remarkable idea. 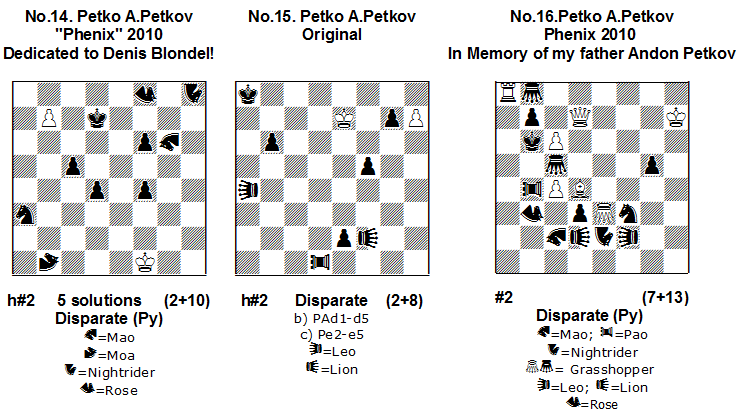 b) En-Passant capture is impossible!

In Disparate (Py) the En-Passant capture is always illegal, because in making a move, the Pawn paralyses the opponent’s Pawn!

In other words, Disparate is “Play without En-Passant”! For this reason in Scheme No.17 there follows 1.b4#, because Pa4 is paralysed and the capture 1…axb3 is illegal!

The Disparate(Py) rule for castling (if all other rules from orthodox composition are satisfied) is simple. This move is realised also with King and Rook simultaneously, but it is perceived only as a King’s move!

Therefore, after 0-0 or 0-0-0 only the King which realises the castling can paralyse (HMP) the enemy King! The castling Rook which has a «50% role» in this strange move, cannot paralyse an enemy Rook!

In Scheme No.18 after 1.0-0 Black is mated because the black King comes under check from Rf1 and it is paralysed by the white King!

But in Scheme No.19 there is no immediate mate: 1.0-0+? because Kf8 is paralysed but Ra7 is not paralysed and there follows 1…Ra8!! with paralysis of Rf1!

2. But do not forget that these different types of Pawns can be promoted in a uniform way – to orthodox pieces Queen, Rook, Bishop, Knight or to fairy pieces that are present on the board, for example: Grasshopper, Nightrider, etc.  Therefore, only after such promotions is Disparate-paralysis possible between pieces of the same  type “x”. 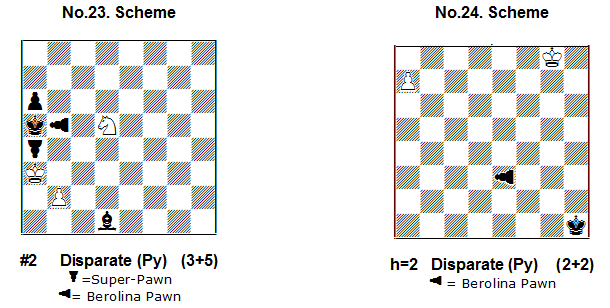 In Scheme No.23 after 1.b4+! Black answers with 1…BPxb4 and there follows the already known Disparate mate 2.Kxb4#. An interesting question – is there possible a variant 1…SPxb3(e.p.) 2.Ka4#? The answer is no, because here the en-passant capture is not possible – despite the fact that after White’s key-move the SPa4 is not paralysed by Pb4!
In Chess composition  en-passant capture is possible only between orthodox Pawns where the movement of these Pawns is not hindered by additional fairy conditions!

In Scheme No.24 paralysis between Pa7 and Berolina Pawn e3 is impossible, therefore we can play 1. BPf2 a8=R! 2.BPg1=R+! But now we have on the board two orthodox Rooks – white and black, and a Disparate paralysis is legal after 2…Ra2=!.

In Scheme No.25 the rSe8 can paralyse Sa2 but cannot paralyse the black King. For this reason a blockade of the black King is needed: 1. Ka1 rSd6 2.b1=S! rSc4 =! A finale with two paralysed black S by the white rS!

Of educational character is the light problem  No.32.  Set-play: 1…e8=CS!! 2.CQa2=CS! Now both Chameleons have the same phase “x” (CS)  and there follows: 2…CSf6=CB#!  because CSa2 is paralysed by CBf6. But it is interesting that Black cannot retain this play, having no tempo-move! In the real play the solution seems difficult: 1.CQc4=CS! e8=CB!! 2.CSb2=CB! – now all pieces on the board (except the King and pawn, of course)  have “x” (B) phase. Therefore, we can play 2…CBa4=CR#!! with paralysis of CBb2 and Bb1! Model-mates in both phases. 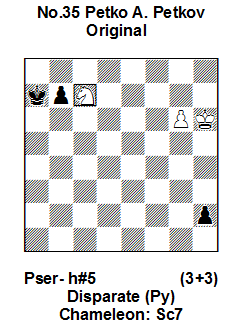 End of Part I. The next two parts will be published soon.

PART III – Disparate in combination with other conditions (to be published…)

Thanks Petkov, Julia and Geoff Foster for this excellent article. The examples are brilliant and instructive. Part (d)(1) correctly explains that ordinary pawns are distinct from Berolina or Super Pawns. I believe ordinary pawns when moving paralyse neutral or half neutral pawns.

The problem with Disparate condition is that the definition of checkmate should be corrected.

Under the Disparate condition, is this a check? a checkmate? a stalemate?

Georgy, the same question you can ask for the same position even in orthodox chess. What would be the answer?

I can not understand meaning of this question. Mate, of course, after 1.Sf2# or 1.Sg3#. What is not clear here?

In orthodox chess the definition of checkmate is following:
“The objective of each player is to place the opponent’s king under attack in such a way that the opponent
has no legal move”.

So abobv example is a checkmate according to this definition (I have heard that the definition was corrected to cover exactly the case when black has no moves at all, though I am unable to confirm this).

At the same time in problems with paralysing pieces, it is considered a stalemate when black have no moves at all, even if the king is under attack. See for example my problem http://www.jurajlorinc.com/chess/ccm7tt_h.htm#uloha6 and comments to it.

There is a same question in Madrasi (which may also be based on HMP) where similar case is also considered a stalemate – see P1235849 in PDB database.

Specifically, if applying above definition of checkmate directly, it is not obvious that “opponent’s king is under attack” as white knight is temporarily HMPed.

In the above example black even cannot remove HMP. How can it “fall off” without black move?

Yes, but in this case wS is not paralyzed by its own move.

The convention with Paralysing pieces is unfortunate. I am sure that the inventor of Madrasi never intended such a condition for his invention Madrasi and I dont think it applies to Madrasi problems. In orthodox chess, it is stalemate only when the side to move has no legal moves and his King is NOT IN Check. This is illogically changed to apply to cases when the KING IS IN CHECK.

There is certain logic in this convention even if applied to orthodox chess.

If the goal of the game is capturing the opponent’s king, then the checking side can not win because they should make they capturing move in turn, but their turn never comes – the other side is stalemated!

I’m not advocating for this convention at all, i just want to note that there is at least *some* logic.

You are correct Dmitri. But when this type of argument is applied in game and not applied to any other fairy condition, having this logic for paralysed pieces is surely illogical. There is no consistency, which should be there in defining basic things like, check/stalemate/mate.

Please, don’t get me wrong. It is quite obvious from the article, what Petko has intended. But unfortunately, the lack of clarity in definition will lead to ambiguity and future “variants” in fairy condition.

So, to avoid the confusion the following may be added to the definition of Disparate.

I appreciate your efforts on the precise definition, but in this case you are wrong. The first sentence of the definition of disparate says HMP refers to ENEMY (not their own) units. The best example is is the series-mover in diagram no. 34, where black men carried out a series of moves and paralysis does not affect them.

Yes, it is very interesting to try Disparate in retro-genre! Your small example is nice!

Sorry, I have to apologize. By some reason (probably, because first Disparate problems published here had neutral pieces), I interpreted the condition as “two moves in a row should not be done by the same kind of piece”. This interpretation is simply the result of my inattention.

As the sign of apology I am currently trying to compose a direct mate Disparate problem to be published here.

I’m looking forward to publish it!!

@ Laco, Petko, Just brouwsing through article and discussion here, I think there is just an earlier Disparate retro 😉
See Scheme 18 with 1.0-0# — but is castling legal? Well, what was Black’s last move? I don’t know, but obviously a King-move, so castling, being a King move, is illegal!
+bPa6 will save Scheme 18 with possible last black Pawn-move — or just the stipulation “#1?” with the solution NO.