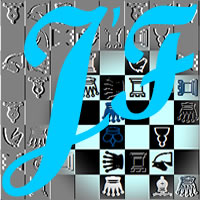 As you know, our dear judge for informal tourney 2012, N. SHANKAR RAM, doing a big work now, judging about 200 problems published in 2012. Soon you will be informed if the problems are going to be splitted into different sections.

For now I’d like to turn your attention to the list of problems which participate in the tourney – in the list for 2012 I’ve left their background white, while making a darker background for the problems which does not participate. I believe that in case of improved versions published for the problems, only these last versions will participate. Also, non-fairy problems doesn’t participate. Of course, your comments or objections will be considered! Please send them during one month – till 15-Mar-2013 – if needed! Together with Shankar we will go through the list again. Some more corrections are possible. And I will inform you about them as well.

And one more information about 2012: I’m happy to let you know, that a problem No.10.1 – h#2* by János Mikitovics & Juraj Lörinc – which is an improved version to No.10 by J.Mikitovics, shown in the comment by J.Lörinc, is added to the list of Original problems 2012 and will participate in the tourney 2012!