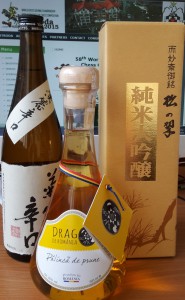 My Participation in WCCC2015 Tournaments

I have composed for two fairy tournaments: 13th Romanian Tzuica Tourney (one problem) and 15th Japanese Sake Tourney (three problems). The both themes were quite nice.

I had two ideas for Tzuica, but finally have finished the first one only. Somehow I didn’t expect much from this problem, mostly because I knew that this tournament is always very strong and I was afraid that three pins are not enough to finish among prizes. If I knew what a pleasant surprise was waiting for me!

About the Japanese Sake, I should tell that the theme of it was just a gift for me! Since the previous Sake in 2014, offered Back-to-Back (BTB) condition, I started to compose with BTB, trying fairy pieces, HS# form.. and finally in the spring of 2015 have composed the first BTB problem with neutral pieces, although in combination with Take&Make. The behavior of neutral pieces with this condition attracted me a lot. And here is the tournament – neutral pieces with BTB/FTF! Honestly, my only thought was that I shouldn’t miss the chance!

All my four problems have been rewarded. I came home with 2 prizes(!) and even 3 bottles! More than happy!