No.253 by Peter Harris – A nice four-men which is difficult for solve! (JV)

Sentinelles: When a piece (Pawn excluded) leaves a square outside the first and last rows, it leaves a Pawn of the color of the side that played unless 8 Pawns in this color are already on the board.

Chameleon Chess: All pieces on the board which are displayed as orthodox  Q, R, B, S,  are Chameleons. A Pawn can promote only in Chameleon-pieces.

Anti-Andernach: A piece (excluding King) changes its color after any non-capturing move. After capture, the piece retains its color. Rooks on a1, h1, a8 and h8 can be used for castling, provided the usual other rules for that move are satisfied. After castling, Rooks do not change color, If White makes a non-capturing move with neutral or halfneutral piece, that piece becomes black and vice versa.

Including the stipulation, five fairy conditions! Perhaps a record ?

I am so pleased you counted the number of conditions.

I wonder whether you solved it.

But it is not a record. Five years ago in feenschach there was the following problem of mine: 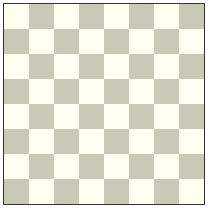 I may have done better than this – at some time or another.

Peter, very interesting about that empty board problem!! May I ask you to show a solution? And have you tested this your solution and how? With popeye? Thanks!

Here is the solution to the empty board problem:

All Ps are necessary for #.

I did not try to solve it. I am not a good solver and the many fairy conditions makes it a little intimidating to try ! Generally, I like to see the problems with solutions and comments of author/others.