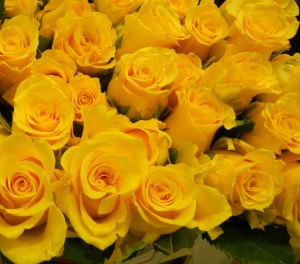 I’m very happy to present you these gifts for Julia’s Fairies 1st jubilee – two problems by GM Petko A. Pekov:

No.293 – Transformation of two neutral batteries with Take&Make effects!

With a gratitude to the author! (JV)

Nightrider(N): A Rider along a straight line on squares lying a Knight`s move away from each other.

I disagree with the evaluation and with the version of Predrag concerning the № 292. Нere the main idea is to show threefold cycle from type set-play + 2 solutions which is relatively a seldom phenomenon in cyclical problems.
Of course here is a very important the moment that White cannot keep the set-play because the zugzwang – its chamelion (Rh8) cannot make tempo-moves, such moves also have not the white Rg5. On this reason CRh8 should change its phase two fois in the real play.
Therefore, in my opinion, the Predrag`s version stands in thematical and aesthetical attitude very very far from my concept.

My “evaluation” was exclusively concerning bBb1 – if it is well/bad used here, then the same criterion and aesthetical attitude should be applied for any other helpselfmate. After reading the article about hs genre, I obviously did not understand quite well the criteria and aesthetics, I am sorry.

There is no Predrag’s version of the original, if the original author’s intention is changed, then it is not the same composition, I agree with that.
But there is an example with changed content. Different play of Chameleon between the set-play and 2 solutions is changed into different Chameleon’s routes between the tries/attempts and 3 solutions.
It may be very very far from the original concept, but still not far enough to be original.
And my intention was not to make a version or new original. Of course, if there is not a single interesting detail in my post, then it was a waste of time and space.
And I still don’t understand the “aesthetical attitude”.

Nice cyclic play in 292. Very interesting is the change of functions of the battery pieces.

It is funny that in No.293 four pawns at b7, b2, g2, h5 can be removed altogether keeping the solutions pretty close to the intention.

THE TRIES IN HS# – PROBLEMS
Regarding the comments from Nikola Predrag (a fantastically active and good commentator!) about my N 292 and using Nikola’s version, I would like to make some additional remarks regarding his position with 3 tries and 3 solutions.
In my opinion, the questions related to thematic tries in HS# genre have not been studied sufficiently clear and thorough. Therefore in this aspect, each new discussion about this component of the content would be interesting and useful. Here I share only my laconic opinion.
1. Theoretically, summing up the problem, we can assume that in a problem with 3 solutions (here we can change 3 with “n”) and thematic tries we must have 3 first (key) moves as the solutions and other 3 first moves as tries. In the other words, it is necessary to show a total of 6 different first moves (3 + 3) .
2. In the aesthetic aspect these 3 tries must have some thematic relation (similarity) with the solutions of the task. But the tries do not lead to success for some reason, which is also better to be clear and pretty motivated as “contra-motive”.
3. It would be very good if only one white figure (for example a Chameleon) realizes these 6 first moves, although these performances are very difficult to achieve, if the tries are perfect.
Following these structural and aesthetic criteria (they are of course mainly subjective), I would like to express my opinion about the tries in the obviously experimental version by Nikola Predrag:
[img 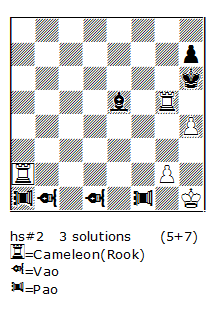 Author says: “But there is an example with changed content. Different play of Chameleon between the set-play and 2 solutions is changed into different Chameleon’s routes between the tries/attempts and 3 solutions….”
My lines are as follows:
A. Unfortunately, in this verion there are only 5 moves of CRa2. We can evaluate as nice (through in some degree “virtual”) the tries 1. CRe2=CQ? (with goal to play CQg4=CS+) but after 1….PAf3 the w.CQ is closed!
Analogical: 1.CRf2=CQ? (with a goal to play CQf7=CS+) but after 1….VAf5 the w.CQ is closed! But bad is the try 1.CRc2=CQ? (with goal to play CQf5=CS+) – here we have only a simple block of VAd1 – therefore here the 3 tries are not adequate in thematic attitude!
В. I think also that it is a big error to argue that in a problem with 3 solutions the same first move (1.CRf2=CQ) in a solution (sol.III) can be a key-move, but in the other solution (sol.I) – a try! Such modus can be used only for problems with twins!
Here the right way is obviously to add to the solution III the following: III. 1.cRf2=cQ VAdc2 (but not 1…VAf5?) 2.cQf5=cS+ VAxf5# (1.cRc2?). This solution shows that there is also dual-avoidance motive after 1…VAf5? (The CQ is closed). Therefore we must write the solutions as follows:
I. 1.cRa7=cQ VAf5 2.cQf7=cS+ PAxf7# – a solution without try.
II. 1.cRa4=cQ PAf3 2.cQg4=cS+ VAxg4# (1.cRe2? VAf3!) – a solution with try.
III. 1.cRf2=cQ VAdc2 (but not 1…VAf5?) 2.cQf5=cS+ VAxf5#; (1.cRc2?) – a solution with try and dual-avoidance motive.
Such contents obviously is not good balanced in thematic attitude, that’s why I’d tell that the version is not satisfactorily aesthetic.

I certainly agree, the example offers only the attempts which require some precision in solving. True thematic tries would have to be in proper balance with the black cycle. At least, the negative effect of each try shoud be related to a different one of 3 thematic black pieces.
A Rook can play theoretically 14 moves and a composer often has to care about duals and cooks. The example actually asks whether some of these moves could be aesthetically organized as thematic tries? Of course, it is much easier to ask then to prove.