No.472 by Petko A. Petkov – Another excellent Disparate problem from Petko with a New Year Greetings to all of us!  Enjoy also detailed author’s comments!
Thank you, Petko! (JV)

Disparate: If one side makes a move with a piece of type “x” (black, white, neutral, half-neutral, etc., King included), the other side cannot answer immediately by moving a piece of the same type “x”. (For example: white Qc1, black Ka8,Qa7 – mate in 1 move. After 1.Qc8#, Black is mated because 1…Qb8? is illegal. The mate is possible also with the neutral nQc1 – after 1.nQc8#. Black cannot move the same neutral Queen.) Every Pawn’s promotion is a Pawn’s move, therefore after such promotion (into any possible piece) the other side cannot answer immediately with its Pawn. We can say that after the move of the figure of type “x” any enemy figure of type “x” falls under Half-moving paralysis. This paralysis disappears immediately on the next half-move, if the opponent plays with another piece of type “y”.
Important note: Disparate condition is not included in Popeye‘s manual, but it is implemented there and can be used as “Disparate“.
Another version of Disparate you can find in WinChloe, but it is based on the different rules.

NAO(NA): Moves as Nightrider, but captures only by hopping over a hurdle to any square beyond.

Nightrider(N): (1,2) Rider. Operates along straight lines with squares lying a Knight’s move away from each other.

Should Vao be on g6 or on h7? In the diagram it’s on h7, but in the solution it is said that it starts from g6
Which is right?

Corrected, it is g6! Thank you, Kenneth! Was preparing this one at night…

Beutiful cyclic double pins. As usual the World champion shows unexpected effects in an apparently simple position ! It seems that Disparate is ideal for neutral pieces, as battery check by moving neutral pieces will work without need for pinning !

About the version of Janos
This is obviously an full unacceptable version.
1. I see no reasons to remove the white king from the board, especially in a problem with a stipulation h=2.
2. The cyclical idea is grossly violated in the version of Janos – is not difficult to see that the three thematic neutral pieces have not identical functions there! Especially unpleasant is the third solution III. 1.nPAd4-g4 nPc7-c8=nVA 2.nNAb5-f3 nVAd3-e2 = each piece makes a move ( nPA includes nN, there is no thematic try with Disparate – effect as in the first two solutions).
3. Pay attention to the fact that in my problem the first move of Black (key-move) and the white second move (stalemate-moev) are realised from the same figure in every solution, respectively nNA( a), nPA(b) and nVA(c). This feature motivates the thematic Disparate – tries for which was already mentioned.
4.An another important feature in my cyclic problem – in every one of the stalemate-constructions the forward places take different pieces: nPAf4(a), nVAf5(b), nNf3(c). The figures on the second place in these stalemate – mechanisms are also different – nVAd3(a), nNb5(b) and nPAe2(c).
5.The improvement of foreign problems is an interesting exercise, but it requires more time and more accuracy in the analysis. We should (also!) not forget that this work is not always successful.

Dear Petko! Thank you very much for your teacher analysis. I know, the version is not a improvement. I would like to know the interrelation of the fairy genre. It will be a long and difficult process for me, where I make mistakes. In this case, a version with 3 solutions motivated me. Everyone can see, not much success. Thanks to you, I can learn much from you.
Janos

I very-very-very much dislike the twins with movement of thematic piece.

But I am very-very-very surprised about this Evseev`s try for an improvement!
At first, it is obvious that all three solutions are unequal in thematic aspect. Pay attention to the second solution: 1.nVAf5-d7 nPa7-a8=nVA 2.nPAf4-f7 nVAd7-e8 = Here the neutral nVAf5 opens a line for the neutral nPAf4 – a good motive, but it does not exist in the other two solutions! Therefore, strategically this solution is better than the other two solutions – a big thematic weakness in cyclical problems in my opinion!
At second: The nPa7 is quite isolated from the other figures on the board (and especially – from the black King). Any promotion of this pawn /even theoretical/ can not keep squares around the black King! Therefore, the promotions in nPA, nVA and nNA here are obvious.
This is also a weakness, not only in optical aspect. In my No.472 the nPc7 stands more actively of course.
For me seems very strange the desire of some composers to create a position with “N” solutions (but with unpleasant thematic compromises) instead of using the form of the twins.
On these grounds I do not accept the version of Evseev as an improvement of my problem and totally reject his position! In the process of my work I have removed dozen of such “Perfect positions” …

Petko,
I have seen most of things you mentioned. But still I consider that the need to accept PAf4 and PAe2 in different twins as the “same piece” is too high a price. I would have accepted as normal the twins with the movement of non-thematic piece or even the black king.

Further still, the unity of the cycle is broken in your position on the second black move, as Pao never moves at this moment.

Georgy,
You write: “But still I consider that the need to accept PAf4 and PAe2 in different twins as the “same piece” is too high a price. I would have accepted as normal the twins with the movement of non-thematic piece or even the black king”.
I respect the right of everyone to give his opinion! But often this opinion is very subjective and does not correspond to the objective reality.
I could give hundreds of examples – wonderful problems which are contrary to your “principles for creation of the twins.” Here I give only two examples – well known problems from Russian top composers – №1 and №2!
[img 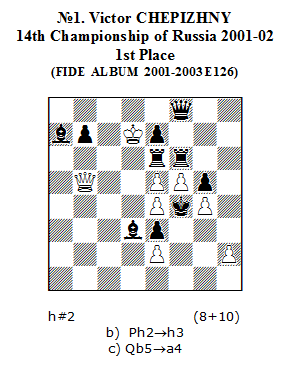 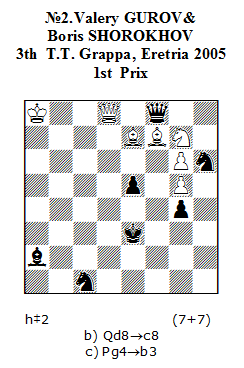 It is obviously that in №1 and №2 we have a quite different ways of creation of twins: position c) in №1 is created with a moving of the thematic figure (Qb5->a4) but in position b) the formation of the twin is quite different (Ph2->h3)
The same situation we see also in № 2: in the twin b) the thematic figure traversed across the thematic line (Qd8->c8) but the twin c) (Pg4->b3) is obviously another method.
Therefore I perceive your opinion, I repeat, as a personal opinion (it has undoubtedly some justification and value!), but not as the main aesthetic criterion for the formation of twins!
About the cyclical character of play in №472 and in your version – yes, there are some minuses in both positions, but I think that in your version these weaknesses are rather rougher and much more unacceptable.
I’ve already spoken about your solution 1.nVAf5-d7 nPa7-a8=nVA 2.nPAf4-f7 nVAd7-e8 = which strategically is not adequate to the other solutions. But there is another very important moment here you haven’t mentioned anything about:
One important point of my assignment are the thematic Disparate – tries. For example: a) 1.nNAb5-d6 nPc7-c8=nNA 2.nVAg6-d3 nNAd6-b2 = !! – Stalemate with two pinned nPA/nVA (AB) and two paralyzed for Black nNAOs! Thematic try: 1.nVAd3? c8=nNA? 2.nNAd6?? but now the nNAd6 is paralyzed for White and impossible is 2…nNb2=??
But in your solution 1.nVAf5-d7 nPa7-a8=nVA 2.nPAf4-f7 nVAd7-e8 = the thematic try is impossible: pay attention, that these tries are realized on the first move, but not with the piece that makes the key-move! Therefore, by your solution the try 1.nPAf7? is impossible because the nPA is closed! About nPa7 – I repeat – it is simply a bad piece on this square!
Probably the both our positions can be improved but it is not so easy. Here more goodwill and peace are needed, probably reading your shouting “I very-very-very….” I felt an inexplicable irritation and overconfidence. I was very surprised because your main arguments (as we can see in №1, №2) are refuted even by your colleagues – great composers.

Your examples does not refute my arguments, because the pieces moved in twins are not the part of cycle. I thought it was obvious as I mentioned the movement of “…even the black king” which definitely was a thematic piece, but not a part of cyclic idea.

In your first example white pawns e4, e5, f5 and black Re6,Rf6,Bd3 should be unmovable (and they are); in second example – white bishops and knght (and they also are).

The reasoning is simple, as I mentioned: to accept cyclic contents in your problem we must consider PAf4 in one twin and PAe2 in another twin as the same piece, and this is not 100% logical.

Concerning “tries”, I am very much suspicious about applying this term to helpplay problems, because really any sequence of moves may be declared to be “a try” here. I would prefer in this case the term “uniform motivation of moves order” which is quite good of itself, but also it is something which I am ready to sacrifice if necessary.

And yes, everything that I write here or somewhere else is strictly my personal opinion. By “very-very-very” I intended to show that this question was thought out by me earlier and is now a strong belief which I will most probably try to enforce when, for example, acting as a judge.