Here I’d like to show my another version of Dentist theme (plus a joint version with Petko A.Petkov which improves the problem – added as of 30-Jun-2012 !), and also I’m very happy to present one more problem from Mr.Balasubramanian and two problems from Mr.Tritten! Plus, a joint problem by Mr.Tritten & Petko A.Petkov is added as of 05-Jul-2012 as an improved version of one of the problems.

No.30 – h#2 by S. K. Balasubramanian – nice problem, where the author presents his favorite KoBul Kings condition – this time – with B and R as thematic pieces.

No.31 – h#2 by Pierre Tritten – very active play of the white King which gives surprise mates.

No.32 – hs#2 by Pierre Tritten – white realizes an interesting self-blocks around its royal-piece.

See all Definitions in Fairy Terms section or click the fairy piece or condition below to go right to its definition on that page:

Once again a wonderful work. In 28, one tooth in each solution hid away by self pin and in 29, they runaway to hideouts and are not permitted to return because the doors are shut by the promoted opponents. The beauty is that the promoted pieces are same as the run away pieces. WQ is well utilized first to clear the way for the two teeth and the other is to drive the BK to the required square. Well matched solutions. Black pieces occupy the square vacated by WQ. Is it again Umnov?
Well done!

Dear Bala,
Thank you very much for your comments! You write so perfectly! I can learn from you!
And you’re right – there’s Umnov as well!
I like the use of wQ here.. I still remember very good the phrase from P.Petkov’s article about hs#:
“The fact is that in HS# problems you can safely use very strong material – Queen, Rooks, Bishops etc”.
I really enjoyed this safe use of the white Q!!
Julia.

No.29 Julia Vysotska – An interesting problem where the main Dentist- mechanism deserves interest! In my opinion, in initial position here we have white half-pin which masks (complicates) Dentist structure. Very good is position of the black pawns, allowing immediate realization of Umnov-theme with promotions.
But in my opinion here are also some minuses – of thematic and aesthetic nature.
The role of the w.Queen is not optimal – through the fact, that it opens lines for white N and B. Of course, every changes and improvements in the initial setting are possible practically only after increasing of number of moves.
So, another, better (probably!) function of this powerfull piece is possible – in the new, but longer version – here the Queen is a rear piece in a battery S/Q and after S- key-moves both pieces – w.S and the black K (!) open lines for the Queen – this idea seems fresh and sufficiently difficult for realization!
Another addition here is the black LEO which pins both white pieces in the initial setting! After its moves, LEO shows unpins, fine Ambushes, motivates also Bivalve – theme (executed by the black Pawns!) and anti-dual tries. All these components are demonstrated here probably for the first time.
But I do not agree that my version is an independent work because of already published № 29. I’ve suggested a joint publication to Julia. I’m glad that she has agreed.
[img 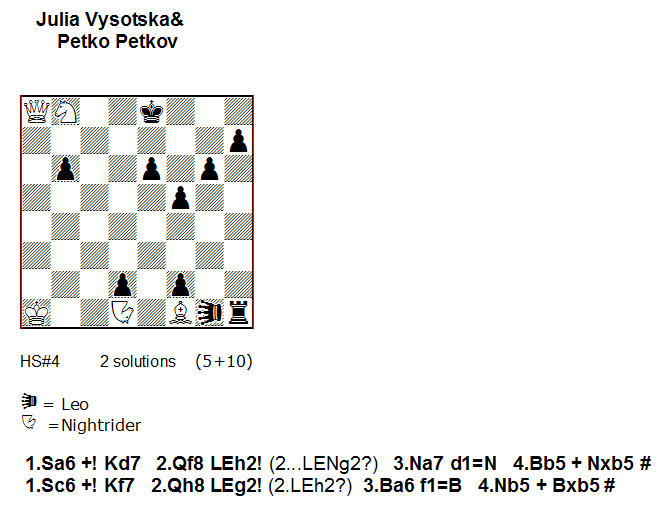 [/img]
Themes: Masced white Dentist combined with Umnov-theme + Bivalve, double unpin of white N and B, ambush moves of LEg1 which forces control over 2nd horizontal and determines Bivalve-theme in play of black Pawns. Anti-dual moves by LEg1, critical moves by unpined white N and B. White S/Q battery – play: after moves of forward piece Sb8 and the black King we have double line-opening for the whiteQueen! A good, active position of the w.Queen in the initial setting!

Again a rich use of thematic pieces in an apparently perfect mechanism.
The pin on the 1st rank is not essential for the content, bLE anyway must guard the 2nd rank. Someone might prefere a pure purpose of 2…LEh2/LEg2 and possible mobility of wNd1/wBf1 in the diagram.
It is often a trap, is it better to have many strategic purposes of one move or only one, pure and clear (if in some phase or at least a try, bLE and bR would exchange their functions, than it would be essential).

Piling up and counting every feature as essentially thematic, could be counterproductive and the true depth of the original mechanism could be missunderstood.
I would certainly not mention ‘Umnov’ and the line-opening by bK, it is absurd to me.

The rest of mentioned features is quite enough for a rich, strong and clear content = excellence!

Yes indeed an excellent problem. The pin on the first rank is not essential , but in the present setting bringing the Leo from another square (say h3) will give a choice of first moves for white and would need substantial change of construction.

Yes, the initial pin determines the order of moves. It is a powerful technical-strategic tool to ensure the correctness of the problem. It could be incorporated into various mechanisms and always looks good. But it is used so commonly that it should not be equalized with the original content. I don’t see that this pin is deeply connected with the rest of mechanism in some original way.
But I certainly may be wrong and my comment is anyway not of practical importance. It is only a theoretical question.

The joint composition of Julia and Petkov is a very nice development of N.29. The dual avoiding moves of Leo on g2 and h2 are neat. But I liked the original version especially the line opening of the powerful queen for the lesser pieces.

Actually, myself I liked that Queen too! I didn’t think about so “hight substances” as optimal role of that Q! 🙂 What I didn’t like myself where some minor things like the wpa5 needed in the 1st solution only and that the one of 2 black pawns d2/e2 has nothing to do in each solution. But the new version doesn’t have these things as well! I enjoy this possibility to learn on the improved versions! I’ll add this version to the Original problems later today.

No.31 Pierre Tritten – The theme “Rex solus” ( for White or for Black) is always a tall goal in this genre. Here the contents is sufficiently interesting but in my opinion there are some thematic and technical minuses.
At first, it is possible to eliminate the unpleasant black technical Rook on f1. We can replace it with a black pawn, turning the board: White: White: Kd6(1), Black: Ka4, Rc7, Bd5, pa3,pb2, pb6,pe3 (7) – H#2 2 solutions; KoBul Kings: I. 1.Bb7 Kxc7 (Ka4=rR) 2. rRa7 Kxb7 (rR=rB)#; II. 1.Rc4 Kxd5 (Ka4=rB) 2.rBb3 Kxc4 (rB=rR)#. (C+).
But I think this first version, like the author’s version has a small thematic defect. It is probably invisible at first glance. For example: in Tritten`s setting, in II solution: 1.Re3 K×d4 [bK=rB] 2.BKf2 K×e3 [rB=rR] # the transformation of the black King after the first white move (1.. K×d4 [bK=rB] ) is not needed – the black King has possibility to play on f2 without transformation in rB! This devaluation of transformation is a typical weakness in this genre.
I think that many other versions in 2 moves are possible here (including composed with twins) where this defect won’t exist.
I also think that another development of this idea is possible in a problem with more moves – 2,5, 3, 3.5, etc.
An example is the following version:
[img 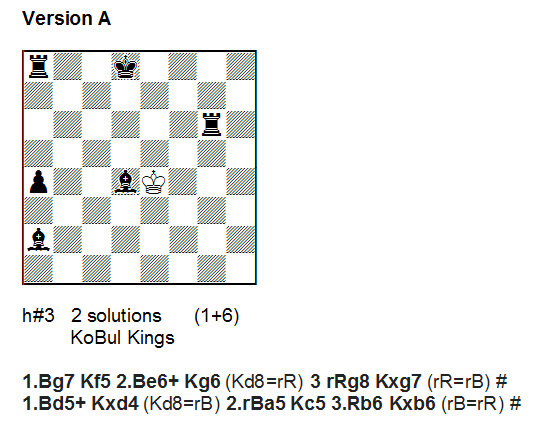 [/img]
Here the thematic of original version is further developed with a new, very important thematic element: distant blocks (on d5,e6), realized from the black Ba2 – inresesting is that these block-moves are cheking – moves!
The Black King demonstrates also perfect dinamic after its transformations in rR and bR. Model-mates in miniature-form. Of course, here Ra8 is not so aesthetic figure but this minus seems organic here.