First of all I’d like to mention that I’m very satisfied about the extremely high level of submitted problems! 64 problems from 39 authors from 20 countries participated in the competition.

Most prominent fairy composers of the world participated and their works will certainly enrich and adorn the most modern genre in contemporary composition – Help-self problems!

Due to this excellent level of competition I have awarded many prizes. Also, it is a great success of the new site “Julia’s Fairies” and I want to congratulate the editor Julia Vysotska for her activity and for her talent as organizer of such a spectacular tournament!

The theme of the competition – play of fairy batteries (or anti-batteries) in Help-self problems, was attractive to many authors. The presented problems are dominated by compositions with rich strategic play, but there are also some very fine echo-compositions.

My main criteria for the awarding was the content of the problem, presented in a precise and economical form. In my opinion, in the Help-selfmate genre heavy constructions (for example – with 20 or more pieces on the board) are not desirable, although they are inevitable in some tasks.

Regarding material, I think that the most important aesthetical requirement is the use of all white and black pieces in all phases (solutions) of the problem. Of course, this is an ideal that cannot always be achieved. But if a white or black piece (not Pawn!) is superfluous in a phase of the problem, it must be perceived as a weakness. For each particular case the judge must consider how much this fault detracts from the problem.

In conclusion I want to point out that in making this award I was extremely frustrated by the differences between computer programs. Nowadays, very often when checking a problem with different programs (for example: Popeye, WinChloe, Alybadix) different results are received. This very difficult and important question has not yet been officially solved by the International Federation for Chess Composition. In this award, for every problem I can only mention the program used for testing.

1st Prize – Georgy Evseev & Lev Grolman – The best problem in this tournament – without any doubt! Critical moves of NAh5 and LEf1 are caused by interesting sacrifices of black Q and R. This paradoxical overture prepares a demonstration of the “Chinese-Indian theme” – creation of anti-batteries after LEf7/NAf6 and NAb2/LEd3. Black corresponds with the same type of combination realized by the NAc8, NAd7 and the black King. A very fine motive in this unique synthesis, where three duos of figures change their functions during the play (LEf1-NAh5; Qf8-Rd2; NAc8-NAd7) is the Umnov theme presented by the white King and black NAOs. Another good thematic fragment is the play of the indirect black King/Bishop battery. The only small negative point is the not quite equivalent play of the black NAOs between phases. I.1…Qf7 2.LExf7 NAf2 3.Kc8 NAf3 4.NAf6+ Ke4#; II. 1…Rb2 2.NAxb2 NAg1 3.Kd7 NAe4 4.LEd3+ Kf3#. (Py 4.61)

2nd Prize – Sven Trommler – An excellent Meredith, which demonstrates a very seldom and difficult combination in the black play: transformation of a black half-battery, which is created from the pieces Ke6, Pd7, Bf5! The white part of the content is an elegant and non-standard creation of reciprocal anti-batteries and batteries, where the exotic pieces Kangaroo-Lions show their true beauty. a) 1…Kf7 2.Sa3 Re6 3.Sc4+ d5 4.Sd6+ Rxd6#; b) 1…Kf6 2.Sc4 e6 3.Sb6+ d6 4.Sd5+ exd5#. (Py 4.61)

4th Prize – Michel Caillaud – A very interesting formation of black anti-batteries: Gf3 and Gf5 change their places and roles in both solutions! Because the Umnov theme with figures of one color is impossible, I do not use that term here about the content. But this is a small terminological detail. The white play here is also good – creation of white Lion/Queen batteries with thematic tries 1.Qa3 and 1.Qc8. Unfortunately, the white Bishop on g1 is a full static actor in this wonderful spectacle, but without this piece the technical realization seems impossible. 1.LId3+ LIh1 2.Qa3 LId1 3.LId7+ LIf3# (1.Qa3?); 1.LId7+ LIf8 2.Qc8 LIc5 3.LId3+ LIf5# (1.Qc8?). (Py 4.61)

6th Prize – Mario Parrinello – A beautiful idea – the initial battery Rc5/nLOd4 deteriorates and a tour by the neutral Locust (the rear battery-piece) results in the formation of a totally new battery – Se1/nLOd1. The mating move is a return of the neutral Locust to its initial position – Switchback, because in this moment the initial forward battery-piece (the white Rook) is pinned on b5! This wonderful combination is fully repeated in position “b”. In my opinion a minus of this problem is the formation of twin b) through reciprocal change of places of two pieces, although this practice is found in many other genres. But in this task it is obvious that there is no other technical method for realization in 3 moves. Perhaps in a greater number of moves a normal twin can be achieved? a) 1.Bf4 LOnxf4-g4 2.Rxb5 LOnxe2-d1 3.Sd3+ LOnxd3-d4#; b) 1.Be3 LOnxe3-f3 2.Rxc5 LOnxe2-d1 3.Sc2+ LOnxc2-b3# (Py 4.61)

2nd Honorable Mention – Aleksandr & Valery Semenenko – A very interesting and difficult thought: the white and black LEOs exchange their functions, playing   on the  vertical and on the diagonal in imitating their roles!!  These white and black anti-batteries (direct and indirect) are very fine, and a good addition to this thematic complex are the initial white LEO  moves which open lines for the black LEO. Unfortunately, the construction is very heavy – 21 pieces (13 of them – static pawns…)  I.1…LEb1 2.LEd4 LEe4 3.LEa7 LEe8 4.Sb6+ Ke6#; II.  1…LEd1 2.LEe4 LEd4 3.LEe8 LEa7 4.Se7+ Kc5#. (Py 4.61)

3rd Honorable Mention – Diyan Kostadinov – A very difficult project – creation of white and black anti-batteries in the first solution and creation of direct white and black batteries in the second solution! This play is decorated with nice dual-avoidance moves. But it is obvious that in this case the restrictive condition Madrasi helps significantly for the realization of this concept. In addition, such manner for formation of anti-batteries and batteries is already well known, including some works of the same author. Two other negative points deserve attention here – the artificial formation of the twin, and the repetition of the squares played to by the white pieces in both phases – c4,b3,d3. a) 1.Rd3 c3 2.VAc4 h1PA! 3.PAb3+ f1VA# (2…h1LE? 3.PAb3+ f1VA+ 4.LEa8!); b) 1.Bxc4+ f1B 2.Rb3 h1Q! 3.Rbd3+ Bxd3# (2…h1R? 3.Rbd3+ Bxd3+ 4.Rh2!)  (Py 4.61)

Commendation – Ofer Comay – This complex thematic idea deserves particular interest – the creation of black batteries S/G is possible only after promotions to black Knights! Excellent overtures to this action are the sacrifices of the white Ss, which allow the promotions of the black Ss! This wonderful Phoenix motive is very fresh! Unfortunately, this problem has an unpleasant defect – the repetition of the move 3.Kd4 in both phases. Another minus is the not quite adequate play of the black pawns. a) 1.Sc5 (Sf1?) Gf2 2.Sf1! hxg2 3.Kd4 gxf1=S! 4.Qe5+ Se3#; b) 1.Sd5 (Se1?) Gd2 2.Se1! fxe1=S! 3.Kd4 f2 4.Qc4+ Sd3#. (Py 4.61)

Commendation – Pierre Tritten – This problem is a small jewel. Here we see four nice white sacrifices of the pieces Rd4 and Sc3 which open the special white half-battery – it has two rear pieces – the neutral Locusts which give the mates! I believe that this beautiful mechanism is not used in the most effective manner – probably an optimal interpretation requires more moves – for example 3!? I.1.Ra4 nLOnxa4-a5 2.Sb5+ nLOnxb5-b6#; II. 1.Rb4 nLOxb4-b5 2.Sa2+ nLOxa2-a3#. (WinChloe 3.21)

Congratulations to the winners and thanks a lot to all participants!!!

1) A new version of problem – 1st Honorable Mention –  Manfred Rittirsch – is accepted for publication here with a consent of the judge, because of the differences in solving programs. The matter is that the original problem was C+ by WinChloe 3.21, but it has cooks in WinChloe 3.23. The problem below is C+ by WinChloe 3.23 as well: 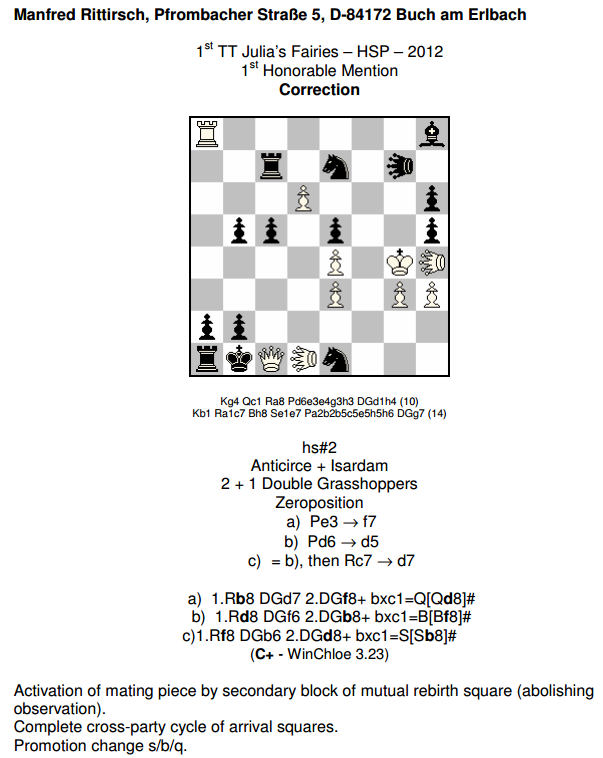 2) 2 corrections are made to specifications of solving programs after solutions (28-Apr-2013):