No.373 by Julia Vysotska – Parrying double check to the black King with the one black piece which simultaneously gives mate to the white King. (JV)

Nightrider(N): A Rider along a straight line on squares lying a Knight`s move away from each other.

In each solution the first 1.5 moves are used to get the vao/pao to the desired square. In the process one of the black nightriders is sacrificed. This is a very clever way to get a Zilahi! I like how the black nightriders make matching moves on B2. In the first solution 2…Nf4 must be played, because 2…Nb7? would pin the pao! In the second solution 2…Nc4 must be played, because 2…Nf5? would check the white king!

Thank you, Geoff! How could I miss Zilahi in the comment? 🙂 Yes, moves by N don’t require any cook-stoppers here at all by the reasons you’ve shown.

This instantly reminded me of Petko Petkov’s 4th Prize in StrateGems 2011 tourney (judged by me, that is why I remember it). See the award at the SG website.

Thanks! But do you think the idea is the same as in Petko’s 4th Prize? I’m showing it here from your award at the SG website:
[img 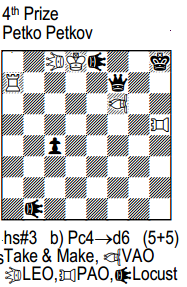 Well, what I see common is that there’s double check which is parried by a black piece (Locust in Petko’s problem), plus a play of PAO and VAO. But the main mechanism is absolutely different! I have reciprocal batteries with PAO/VAO, but Petko has anti-batteries with activity of the white King.

Anyway, thank you for showing so nice Petko’s problem here!

That’s right, I meant the basic idea of parrying double check by very precisely determined Take&Make capture. The other elements are entirely different and undoubtedly the same effect can be shown in many other ways. (Actually, this probably might even be a theme of some future theme tourney: hs# T&M where the double check on the final white move is parried by precisely determined T&M capture.)