Grasshopper(G): Moves along Q-lines over another unit of either color to the square immediately beyond that unit. A capture may be made on arrival, but the hurdle is not affected.

Sentinels Pion advers:   When a piece (not a Pawn) moves, a Pawn of the colour of the opposite side appears on the vacated square if it is not on the first or the last rank, and if there are less than 8 Pawns of that colour on the board.

Maximummer – Black must play the geometrically longest move or may choose from among longest moves of equal length, distances being measured from the center of each square. Diagonal and oblique distances are measured from the orthogonal coordinates by using Pythagora’s theorem (take the square root of the sum of the squares of the orthogonal distances). All other orthodox chess rules apply. 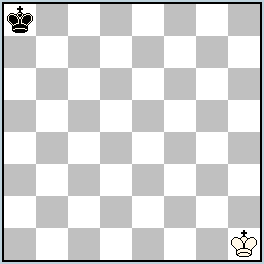 I am aware of the same first moves but: