I’d like to present the first 4 original problems of this site: 2 my own problems: No.1 – light miniature with KoBul Kings and No.3 – the one of my first helpmates. No.2 – an interesting problem with critical moves by the known Indian composer who also сooperates with this site a lot! №4 – a nice problem with Маsand Chess (a little sorry, that in 1 solution only).

KoBul Kings – When a piece (not a pawn) of his own side is captured, a King transforms into a Royal piece of the same type as the captured one. When the King is in the form of any Royal piece and there is a capture of one of the pawns of his own side, he becomes a normal King again. Сaptures are illegal if their result is self-cheсk because of the transformation of the Кings according to KoBul rules. Castling is allowed only if the KoBul King is on his initial square in the form of a normal King and if he has not already moved; however he may already have been transformed. In the case of capture by a King in AntiCirce he is reborn on his initial square and may castle. If the capture is by a King which is in the form of some Royal piece, he is reborn on the initial square of that piece (the definition from www.kobulchess.com). The perfect examples of KoBul Kings you can see in the Award of KoBulChess TT 2012.

Masand: A unit which moves and actively checks changes the colour of all the units – enemy and its own (not Ks) – which it observes after the move. A checking rear (non-moving) piece of a battery would not recolour the units it observes.

The diagrams are made on WinChloe and it’s Echecs font is used for Logo design.

No.1 is very nice, with the black pieces alternatively blocking squares and getting captured to transform the black king for the mate !

Masand Chess is new to me. An accurate definition might help. Does the transformation happens when the opposing King is attacked or after the checked king moves?

Ram, you’re right – the definitions are needed! I’ve added them now. Thanks!! (Masand is new to me as well!)

I’ll translate in short words. (Иван, я коротко переведу, не возражаете? Определения условий тоже перевела сейчас на русский язык). Ivan, the author of No.4, writes, that the first time he’s seen the Masand Chess condition in the article from feenschach Heft 140 April-Mai 2001(pages 72-76), by Petko A.Petkov. The article was in German, he couldn’t understand, but learned by the examples and started to compose.

PETKO PETKOV – In my opinion in problem N 2 Seetharaman Kalyan demonstrates a very original and interesting complex of fairy-motives. The play of both black Lions we can define as “Reciprocal Bristol on two opposite directions”. Yes, this combination is very rare when it is executed with identical pieces (here=LEOs). I think that concerning all Bristol types it is not needed to speak about “critical moves”, despite in Bristol combination exist some “critical elements”. According to white play here, I doubt that everything is made optimum. White Leo stands a little bit passive on square “g8″ and probably it prompts what should be the white play. Аn interesting new version (but in 3 moves and without twins) is possible in which is added the new – interesting and also rear motive – preliminary moves by the white LEO on g8, g7 before critical moves. After that follows the author`s combination without any changes. In my opinion here we can cal white play so: ” White Leo`s roundabour maneuvers with critical moves and creation of anti-batteries”. I show here only a position – scheme which probably is possible to improve in technical aspect. See my idea at: 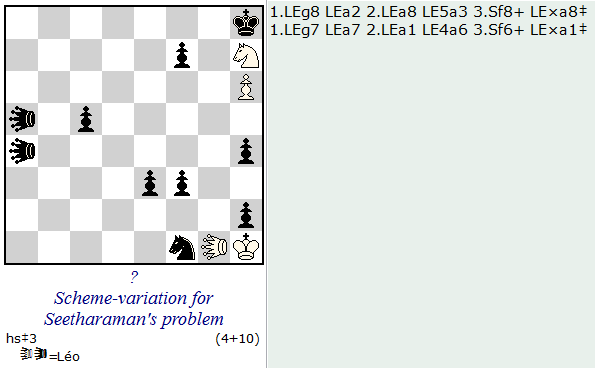 Thanks Petko for your comments.Yes, the twinning in my version was not satisfactory. Your suggestion greatly improves white’s play. I wish I had thought of it myself 🙁

Wasn’t this problem composed for the 9th WCCT but didn’t make it to the India selection?

Yes. This one didnt make it as our entry, as there was some doubt whether or not black’s moves could be considered thematic (though we felt it was thematic) so selected the other problems.

I see, Petko, that I had exactly the same idea now when seeing Seethamaran’s diagram – and during the WCCT entries preparation too. 🙂

Juraj, Did you find a similar setting and rejected for your WCCT entry …..? Was it for doubt on theme or having better entries ? In our case it was both.

Definitely better problems than the one developed from the scheme with wLE playing to corners. But that one had the most versions and I am already planning the article showing the development of the scheme. Now I hope not to forget to include your take on the scheme just for comparison. And maybe there will be some examples among competing problems after all, we will know soon.

Hello and compliments to the hosting Julia!
I’m puzzled with Russian terminology. What is a meaning of:
…”будет два идеальных мата”…, with regard to bSe4 in the 2nd solution?

Yes, as I have understood, ideal mate means that all b+w pieces
are necessary in mate. If so, bSe4 ,can be removed in 2nd mate.