All previously published problems you can find in the subsections of Original Problems menu on the top. The judge of informal fairy tournament JF-2016(I) – Petko A. Petkov. The judge of Retro and PG problems 2015-2016 – Thomas Brand.

The Award will be published on KoBulChess.com till 31.03.2016 |  Announcement with examples, PDF 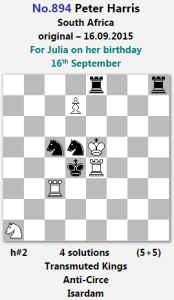 Just 2 days left to submit your entries to  the 2013-15 WCCI. The tourney director is Dmitry Turevsky (email: dmitri.turevski@gmail.com). Participants may submit their entries by January 20, 2016. See the list of Received entries at wfcc.ch website. 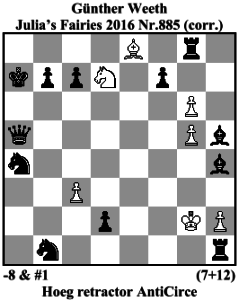 How to solve defensive retractors under the condition of AntiCirce

Shortly after the fabulous start of that successful story of the Proca retractor under the condition of AntiCirce Wolfgang Dittmann dealt with the question of how to approach that new type as a solver. He laid down a summary of methods that might pave the way to the solution of problems of that kind in two articles: Die Schwalbe, vol. 204, December 2003, “Lösungsstrategien im Verteidigungsrückzüger mit Anticirce-Bedingung”) and – as a supplement – in Die Schwalbe, vol. 207, June 2004 where he provides valuable information concerning the testing program “Pacemaker” established by Thomas Kolkmeyer. Since then the fairy condition of “AntiCirce” has not only stood its ground in the field of the Proca retractor but also in a wider range of retro problems. The new type has been welcomed by a small number of highly motivated solvers, even so by such solvers being somewhat reluctant to tackle it in the first two or three years of its existence. →The Article (PDF, 8 pages)

The arrows of St Sebastian

The theme required : a problem with 7 pieces minimum (black, white or neutral) on the same file or diagonal, the total of pieces is free. Two pieces maximum can “touch” the shape of the arrow. All fairy piece(s), fairy condition(s) and stipulations are allowed. → See announcement with examples (PDF)

Ultimate date : 10 of February 2016 to send to Sebastien Luce (judge), by mail : luceechecs@gmail.com

The most beautiful arrows will receive some delicious chocolates of Clichy (France) !

The Serbian Chess Problem Society invites you to the 59th World Congress of Chess Composition (WCCC) and the 40th World Chess Solving Championship (WCSC). The event will be held from July 30th to August 6th 2016, in the 5-star Metropol Palace Hotel, in the center of Belgrade.

The Opening ceremony (July 30th) will be in the Assembly of the City of Belgrade.

The Open solving (August 1st), will be directed by Axel Steinbrink (Germany). The director of 40th WCSC (August 2nd & 3rd) will be Brian Stephenson (Great Britain). For the first time in the history of WCCC, separate competitions for juniors up to 18 years will be organized, both in composing and solving chess problems.

All previously published problems you can find in the subsections of Original Problems menu on the top. The judge of informal fairy tournament JF-2016(I) – Petko A. Petkov. The judge of Retro and PG problems 2015-2016 – Thomas Brand.

Required are reflexmate miniatures in 4 or more moves with fairy pieces. Only ‘real’ reflexmates (with white reflex try), no semireflexmates. Fairy conditions, fairy boards, series-movers and mixed stipulations (e.g. helpreflexmate) are not accepted.

Judge: Hans Gruber | Tourney director: Frank Müller | Submissions via email to Frank Müller, framutor@aol.com
Closing date: June 30th, 2016 | The award will be published as a special issue of the mpk-Blätter end of 2016.